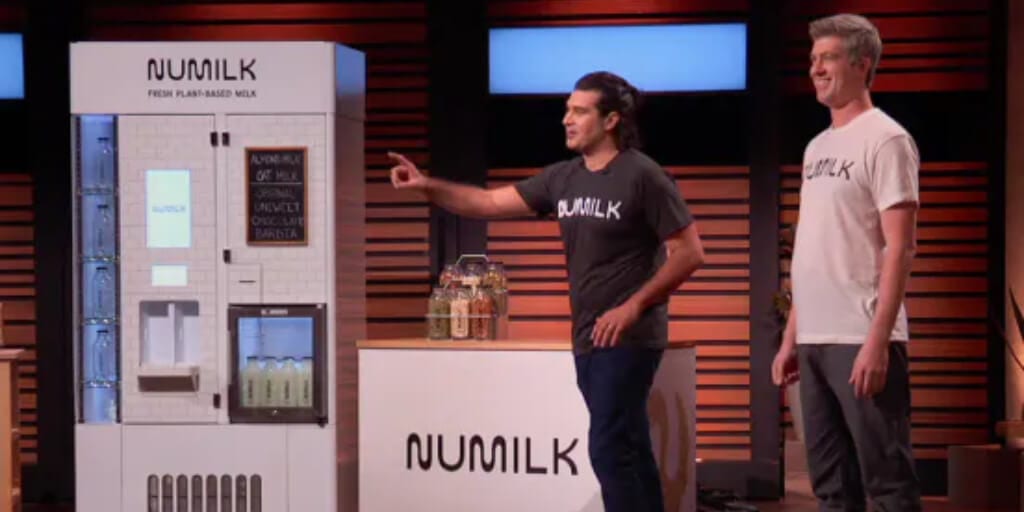 “With Numilk, you make your own delicious clean plant-based milks, lattes and protein-based shakes in less than a minute. Better tasting, better for you, and better for the planet.”

On March 26, billionaire Mark Cuban invested $2 million in a company called Numilk, which has made a DIY vegan milk machine.

The deal was finalized after the company pitched its idea on ABC’s Shark Tank.

Apart from machines for grocery stores, the duo has also developed Numilk Professional countertop units for cafes and coffee shops, and this summer, they plan to roll out a smaller, countertop unit for in-home use.

According to the pair, the machines serve as healthy alternatives to pre-packaged plant-based milks, many of which can contain additives like gums and emulsifiers.

The resulting milk, which can be dispensed into a reusable bottle has a 90 % lower carbon footprint compared to pre-packaged milks and also helps cut waste from single-use bottles.

“We took our grocery machine and we shrunk it down so it works on your countertops,” Tolwin said of its latest Numilk Home unit.

According to the duo: “With Numilk, you make your own delicious clean plant-based milks, lattes, and protein-based shakes in less than a minute.

“And we promise you’ll be astonished at the delicious, creamy taste.  Introducing Numilk.  Better tasting, better for you, and better for the planet.”

The company also launched a Kickstarter campaign to promote its latest in-home machine and has raised already around $60,000 more than its $100,000 goal.

The Shark Tank investors were particularly interested in the home unit with Shark Daymond John stating: “That right there is a necessity for the family, I think.”

To strike a deal, Tolwin and Savino pitched for a $1 million investment for 5% stakes, which would be a $20 million company valuation. However, Cuban, who wasn’t satisfied eked out an investment plan.

He offered to give the duo $1 million for 7 % equity and an optional $1 million loan at a 3% interest along with an additional 3% stake in advisory shares.

The Home machine costs $199 and is now available for pre-order with estimated delivery in August.

Numilk is the latest and the largest vegan investment Cuban has made on Shark Tank to date.

The Dallas Maverick’s owner has already built an extensive portfolio of vegan brands, the most recent being Black-owned plant-based meat brand Everything Legendary, which netted a $300,000 deal after appearing on ABC’s Shark Tank earlier this month.