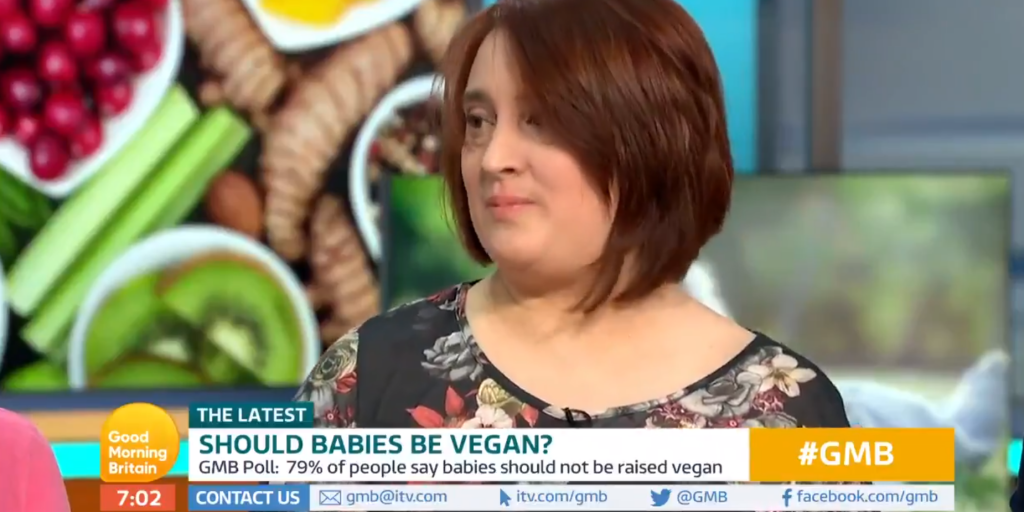 A vegan mother has given an incredibly composed response to a live interrogation about her choice to bring up her child on a plant-based diet.

Good Morning Britain featured an interview with Jess Pourasghar following a poll which found that 79% of viewers believe a baby should not be raised on a vegan diet.

Host Susanna Reid began the questioning: “What if when he’s four or five he says I don’t like all this alternative stuff, I just want to eat what my friends are eating at school.”

The mother, who was accompanied by her partner and baby, instantly gave an impressively composed response.

Veganism is on the rise! ?

More and more people are going vegan, but is it wrong to make babies follow suit? ?

Let us know what you think… pic.twitter.com/OtW5zgvub7

“Well I’d be disappointed obviously. I would tell him the truth about where it comes from,” she said.

‘Would you stop him?’

Reid was clearly unconvinced by the mother’s response. She asked: “But what if he decides having taken all of that into account he wants to carry on eating meat, would you stop him?”

She continued: “At the age of five for instance, I would stop him because it’s still my choice to raise him at that age, and every parent would make their decisions for them.

“You know if at five years old he saw someone drinking a beer or smoking a cigarette and said ‘I want to try that’, of course I would say ‘no you can’t try that’.”

The mother added that she will probably continue to provide a vegan diet for her son until he is 16 or 18.

Vegans supported the mother’s decision to raise her child vegan on Twitter, one responding ‘Fair play to her, she’s got it right’.

Another said: “I stopped eating meat at six years old when I found out what it was.  Whichever way you are imposing your own views.”

And one vegan added: “Well done to this lady bringing her child up to be compassionate. And healthy.”

What do you think of the vegan mother’s interview? Tell us in the comments section below!