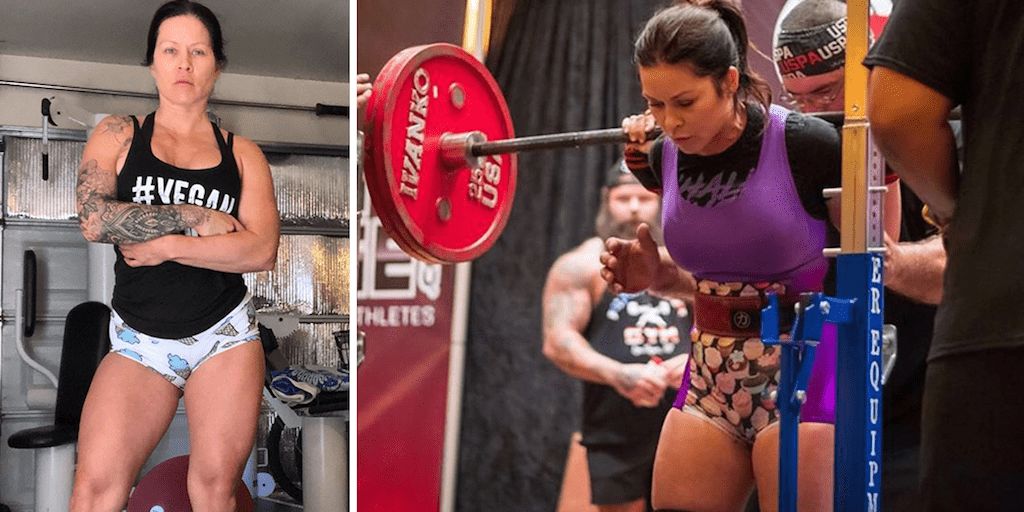 After starting off competing in the bikini and fitness categories of bodybuilding, the 37 year old powerlifter moved to Crossfit in November 2014 and shifted to powerlifting in October 2016, with her first competition in December of that year.

She has since achieved astonishing feats and has scooped several titles and records within a short span of time.

At the USPA Drug Tested Nationals in Las Vegas, Presswood won at the State, National, and World levels, becoming National champion in her M1 (40-44) 60kg category. Her scores were recorded as an official Elite Total.

Starting with squats, Presswood broke the State National and World records at the second of her three lifts. On her final attempt, she lifted 130 kg (286.6 lbs).

To achieve both State and National records, Yolanda had to bench press 70kg, she clocked in with a 67.5 kg bench, overriding her personal best at 60 kg.

She cracked the State, National, and World record in the Deadlifts category after she finished at 155 kg (341 lb) on her third attempt.

Acknowledging her efforts, she said: “The magnitude of this accomplishment for me is huge. I set out with this as my goal, and it’s exactly what I did.”

Presswood had to lose weight to qualify as a 60kg weight class lifter. She wanted to compete in this category as a lower weight would allow her to attempt 12 records – including four world records.

The task was not easy as she grappled with issues such as intercostal strain, muscle fatigue, loss of strength and PTSD.

“Luckily with the help of my PT and friend Natasha Barnes, I was able to continue to lift despite the painful strain,” she told Great Vegan Athletes.

However, her issues made weight loss even more difficult. But she endeavored and incorporated fasting and carb-cutting to eventually make the cut at 59.5 kg.

Later, she said: “I would not have considered cutting weight if not for a chance at four world records. I will never do this again. I don’t recommend it to new or newer lifters either. Just lift at whatever weight you’re at!”

Presswood attributes her success to her disciplined life, clean eating, and vegan lifestyle.

She said: “I was lacto-ovo vegetarian from 16-19yrs old. I’ve always hated eating flesh. At 19 back in 1996 I tried being vegan but I had no one to help and it definitely was not mainstream like it is today. I was always meant to live compassionately. I’ve always loved animals.

“I went vegan back in 2010 after reading a little book called ‘the ultimate ph solution’. It was not a pro vegan book per se, it spoke on the acidic nature of animal flesh and products in our bodies. I had already been predominantly dairy free since I was 19. Being health conscious it made sense to cut out all animal products,” she added.

In an earlier interview with Great Vegan Athletes, she said: “I decided I’d look deeper and picked up Alicia Silverstone’s book The Kind Diet. It was there that my eyes were opened to the atrocities animals suffer every day.

“My household is vegan for the animals, including our two teenage children… Vegan for life. Strong hearts. Strong minds. Strong body.”

What else can vegan athletes do to dispel myths about veganism? Share your thoughts in the comments section below!