“Vegan propaganda”: Public dismiss UN advice to go plant-based to save the planet 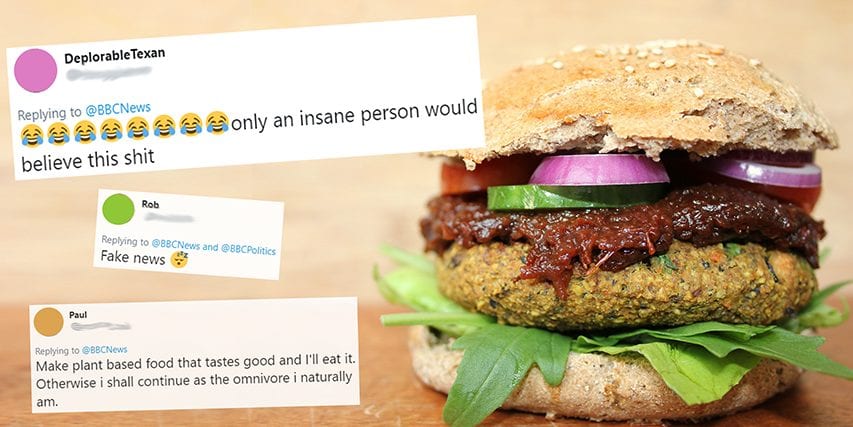 The UN has released an in-depth climate change report prepared by 107 leading scientists. They have advised that switching to a plant-based diet would be hugely beneficial to our planet, but the immediate reaction from the public is one of outrage, disbelief and claims of propaganda.

The major report on land use and climate change warns that high consumption of meat and dairy is driving global warming.

But despite the clear benefits of going plant-based, the UN is falling short of advising people to go vegan.

Prof Pete Smith, an environmental scientist from Aberdeen University, UK, told the BBC: “We’re not telling people to stop eating meat. In some places people have no other choice. But it’s obvious that in the West we’re eating far too much.”

Despite the huge amount of evidence on offer, meat eaters have reacted with fury to the report.

The top comments on a BBC article which explained the scientists’ conclusion reveal a sense of denial. Many focus on the world’s growing population, downplaying the importance of diet.

Others accuse the BBC (and UN, presumably) of ‘Vegan propaganda’.

While others were more interested in their own lifestyles than the health of the planet.

Another sombre perspective argued people are unlikely to change their habits.

For most vegans, the new report will come as no surprise.

Anyone who has watched pro-vegan documentaries such as Earthlings or Cowspiracy will know all too well the damage animal products do to our planet.

But the immediate reaction is split between two ways to ignore or belittle the report’s conclusions.

Some outright reject a document from some of the world’s leading scientists and cry ‘Fake News’.

And the other half immediately jump to blame something else – population growth.

Yes, population growth is contributing to global warming, but to the vast majority of people there’s nothing we can do to prevent it in our day-to-day lives (apart from not having children).

But there IS something we can do about our diets. When evidence is staring you in the face that you as an individual can make a difference, it is pure laziness to simply say ‘someone else should do something about it’.

Are you surprised by the reaction to the UN’s report? Share your thoughts in the comments below!