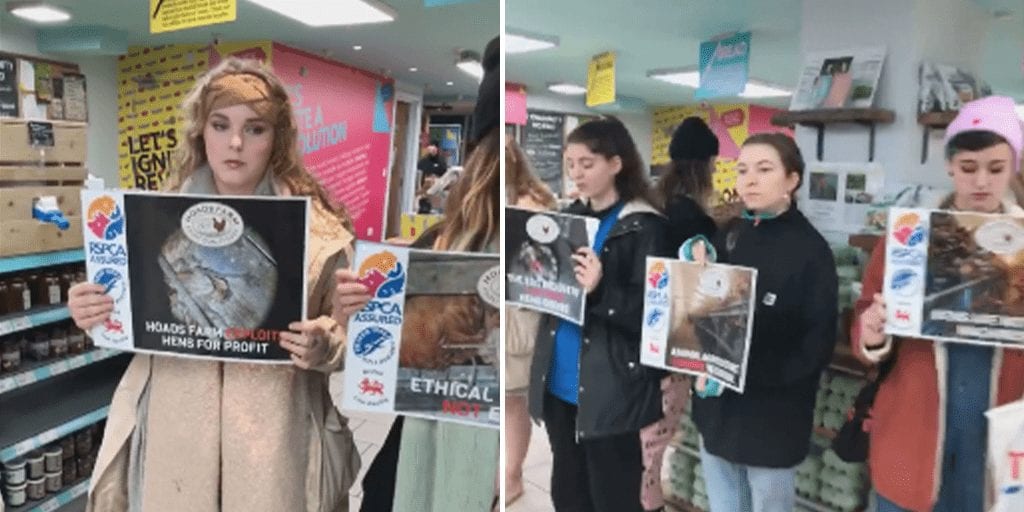 Vegan activists in Brighton, UK have completed a series of protests, including at supermarkets Sainsbury’s and Aldi, in which they targeted the free range egg aisle.

The footage shows protesters shouting ‘free range eggs are a lie, animals do not want to die’ and reading speeches to expose egg industry practices.

Activists explained that, even at free range farms, male chicks are gassed soon after birth and chickens are slaughtered when they are 18 months old.

“These disruptions are not just about Hoads Farm, they are about all eggs,’ an activist said.

“There is no such thing as humane eggs.

“We are exposing a free range farm because we are demanding that animals be recognised as individuals with the right to bodily autonomy. Other animals are not on this earth for us to use.

“We are not here to argue that farms need higher welfare standards, because we believe exploiting animals is wrong and it needs to stop. However, showing people the reality behind their free range label is a start to raising awareness.”

The activists stayed at each store for 20 minutes before leaving peacefully.

A spokesperson for Sainsbury’s said: “A group visited our Brighton superstore for a brief time and left peacefully.

“The welfare of our animals is extremely important and Hoads Farm free range eggs have been withdrawn from sale while we investigate these allegations.”

Share this article to reveal the truth behind the term ‘free range’. What do you think of the actions of the activists? Share your thoughts in the comments section below!