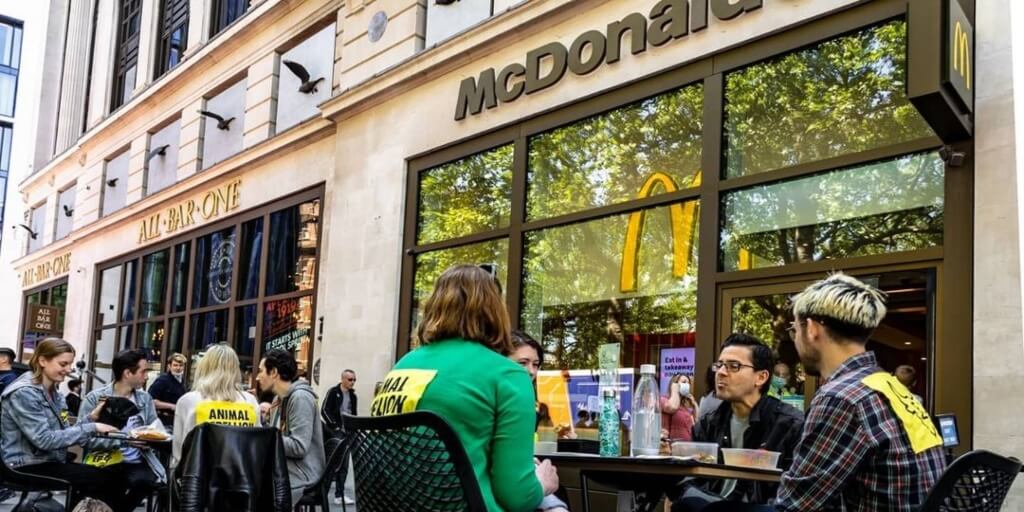 Animal Rebellion protests are aimed at making “McDonald’s tell the truth about the McDestruction that they cause on a mass scale, quit the greenwashing, and begin the transition to a plant-based menu by 2025!”

After blockading four McDonald’s UK distribution depots, in the past weeks, Animal Rebellion is in no mood to back down.

Its latest form of protest is called  ‘Mc-sit-ins’ – in which campaigners gather to eat vegan packed lunches together at McDonald’s outlets.

The first one took place on 30 May at the restaurant’s West-End branches in London.

While the chain closed down the indoor seating in order to deter the protestors, the group of rebels managed to occupy outdoor seating areas instead. They called it a ‘McSit-out in the sun’.

The protestors managed to disrupt the business for a total of 2.5 hours, with the aim to reduce consumption at the stores, and send an important message to McDonald’s.

“We are making it clear that last week’s distribution centre blockade was just the beginning! We will continue to disrupt business as usual for them until we get to speak to the CEO and our demands are met! It’s about time McDonald’s are held accountable for their crimes against the climate, the animals and their workers,” the group wrote on Instagram.

It added: “We demand that McDonald’s tell the truth about the McDestruction that they cause on a mass scale, quit the greenwashing, and begin the transition to a plant-based menu by 2025!”

In a following post, the group updated that McSit-ins are now being planned in Stoke Newington, Manchester, Northern Ireland and Luton in the following weeks.

McDonald’s is lagging behind

According to Animal Rebellion – a sister organisation to Extinction Rebellion – McDonald’s is lagging behind other chain restaurants in shifting its menu.

While Wagamama and Ikea have both pledged to be 50% plant-based in the next couple of years for sustainability reasons, Burger King has also announced that it would be focusing on a plant-heavy menu in the next decade.

“As the biggest and most well-known fast-food chain, why is McDonald’s not leading the way?” the group said.

Additionally, Animal Rebellion accuses the chain of being ‘the biggest symbols of the animal agriculture industry’ and being involved in deforestation which as we know is destroying the planet.

‘Killing nature ourselves for hamburgers’

One of the protestors in discussing the reasons he decided to join Animal Rebellion’s campaign said: “It’s terrifying what’s happening, one to two acres every second of rainforests are disappearing and a lot of that is to farm more animals, this system is literally killing us, killing nature and we will kill ourselves in order to promote ourselves hamburgers”

James Ozden, a spokesman for the group added: “The meat and dairy industry is destroying our planet: causing huge amounts of rainforest deforestation, emitting immense quantities of greenhouse gases and killing billions of animals each year.