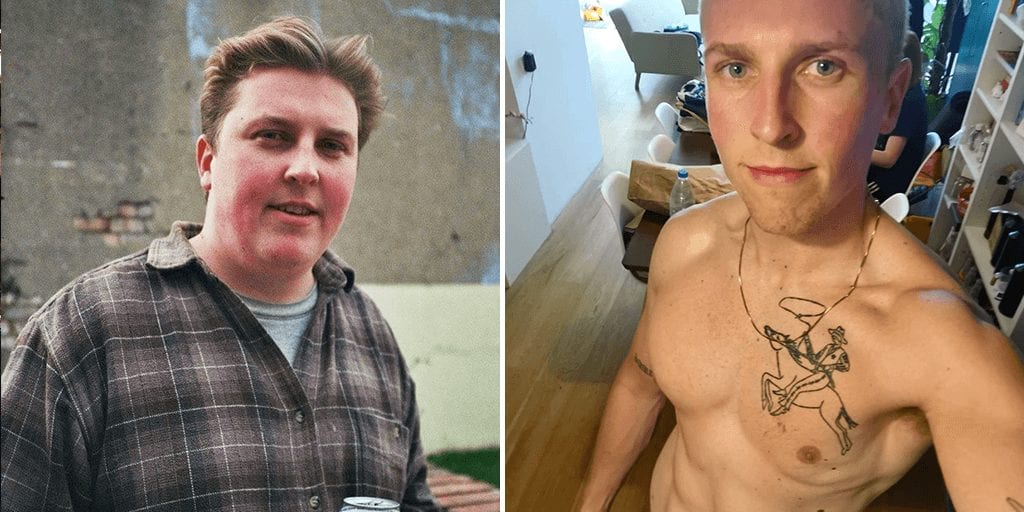 A 26-year-old photographer and filmmaker has transformed his health after losing almost 10 stone following a clean vegan diet, ditching alcohol and working out diligently.

Brighton based Harvey Quirke struggled with weight since childhood and became increasingly conscious of his bulging waistline as he grew older.

He recalled in a Facebook post that his insecurities stemming from his increasing frame made him more anxious, which led him to gorge more of pizzas and diet coke, worsening his health in the bargain.

“I used to eat all the time because I felt anxious and having panic attacks which just became a vicious circle,” he wrote.

“At my heaviest point I was around 20+ stone and I really started to feel it was becoming detrimental for my health, a diet of pizza and two-litre bottles of coke.”

Quirke added his weight impacted every aspect of his life from the relationship with his girlfriend to outings with friends and recurrent anxiety attacks.

He added that he became a social recluse and started to avoid events and meeting people.

He told The Mail:  “I love meeting new people and socializing but my weight prevented me from attending certain events or gatherings Such festivals, the beach or parks.

“I developed a phobia for taking my top off, I think for about eight years of my life no one saw me topless even my girlfriend or family.”

Quirke was raised a vegetarian but went vegan at 21 hoping that would address his weight issues and pizza and coke carvings.

He even attempted to crash diet eating only ‘one small plate’ of food a day, which left him drained and starved.

“I did it in the most unhealthy way. This was mainly because I felt too insecure to step in a gym and work out in front of people,” he told The Mail.

“I wouldn’t recommend it as I just felt drained mentally and physically. I did this on and off for about six months and lost two stone but then it was put right back on when I went on a binge-eating session.”

Quirke eventually paid heed to his friends who encouraged him to start exercising after his weight reached an all-time high in 2016 and managed to lose 8 stone in a year’s time by going to the gym with his friends. His weight still continued to fluctuate between 12 and 13 stone.

He then started paying attention to his diet after working with a vegan trainer, who helped him follow a proper exercise routine that made sure he gained and maintained strength while losing weight.

Quirke was making good strides, when a close friend’s death in late 2019 spiraled everything out of control and he added the pounds back on the scales.

“I was very depressed, anxious and stressed. I consumed a lot of food and alcohol and went off the rails a bit,” he recalled while speaking to the tabloid.

“Then in January I decided I needed to change for good.”

Finally deciding to take the reins of his health back in his hands in January 2020, he started eating mindfully and training regularly in the gym.

“I decided after a very heavy December emotionally and physically where the stress eating and boozing really kicked in that I want to get leaner,” he wrote on his FB post.

“Over the past four-and-a-half months I have been rigorous with tracking my macros, weighing my food and quit boozing for three and a bit months.

“I didn’t actually cut anything I enjoyed out of my diet. I still ate junk food here and there as long as it fitted into my macros.

Nothing wrong with being bigger

Quirke hopes his story can help anyone going through a similar struggle but adds that there is nothing wrong in having a larger frame. He stresses in his post that his weight loss journey was to take care of his deteriorating physical and mental health.

“I don’t think there’s anything wrong with being bigger or overweight if you’re happy as you are I think that’s great.

“Just for me mentally and physically I had to do it as it was part of the reason for my panic and anxiety attacks.”

Share this story to spread awareness about the health benefits of going vegan.