Vegan singer Bryan Adams: “Killing animals for food is f****** up the planet” 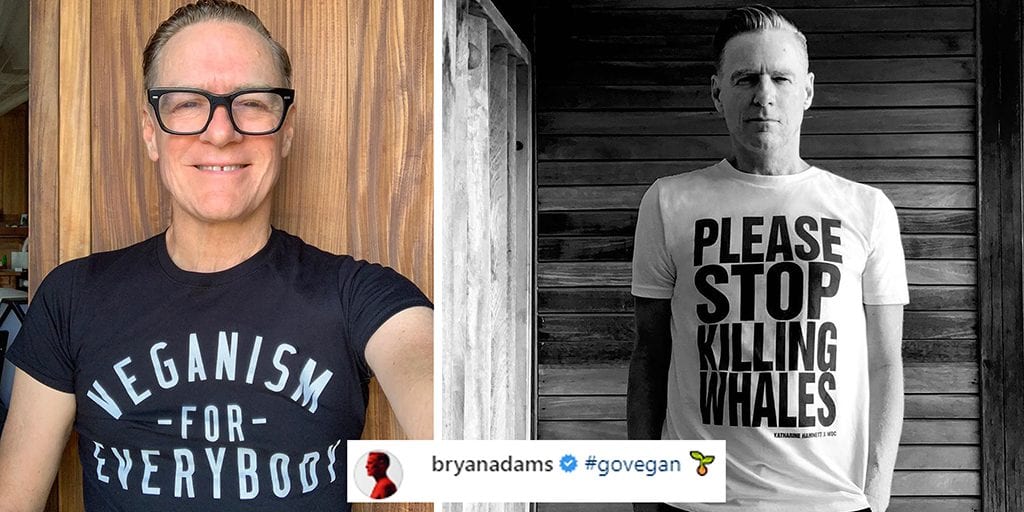 Vegan singer Bryan Adams has posted a powerful message on social media in which he blames meat eating for destroying the planet.

The musician shared a picture of himself on Instagram wearing a t-shirt which reads  ‘please stop killing whales’.

“Just the fact that this T-shirt has to get printed blows my mind,” he wrote.

“I remember the save the whales campaign from the 1970s! Even after years of people campaigning to stop whaling, there are still countries that persist like Japan, St Vincent/Bequia, the Faroe Islands and Norway that consider it acceptable to kill these magnificent giants.”

Adams references ‘traditional’ whale hunting in the Faroe Islands – where earlier this year activists revealed 536 whales have been killed since January.

“There’s no need for it, despite any cultural or aboriginal claims of sustainability. The future is recognising that killing animals for food is f*****g up the planet,” he added.

Images from charity the Sea Shepherd earlier this year revealed the sea turning blood red in an annual hunt at the Faroe Islands.

Activists reported witnessing an unborn calf being cut from its dead mother’s womb as hunters killed whales for their meat.

Reports reveal children were witnessing the horrific show, and some were even seen jumping on the whale remains.

The Danish Islands are just 440 miles from the, and the tradition stems from centuries ago when the local population needed to stockpile meat over the winter.

Residents claim the hunt is sustainable and legal, but animal rights groups argue it is inhumane.

The Sea Shepherd has fought for years to have the tradition banned.

The organisation’s captain, Paul Wilson, wrote: “The killings in the Faroe Islands are brutal. The pilot whales or dolphins are driven onto beaches after long chases that are extremely stressful.

“They are killed with knives and lances and contrary to the ridiculous claims that the whales die within seconds, the fact is, and we have observed this each and every time, the slaughter is gruesomely long and the cetaceans suffer horrendously.”

What should be done to stop whale hunting? Share your thoughts in the comments below!