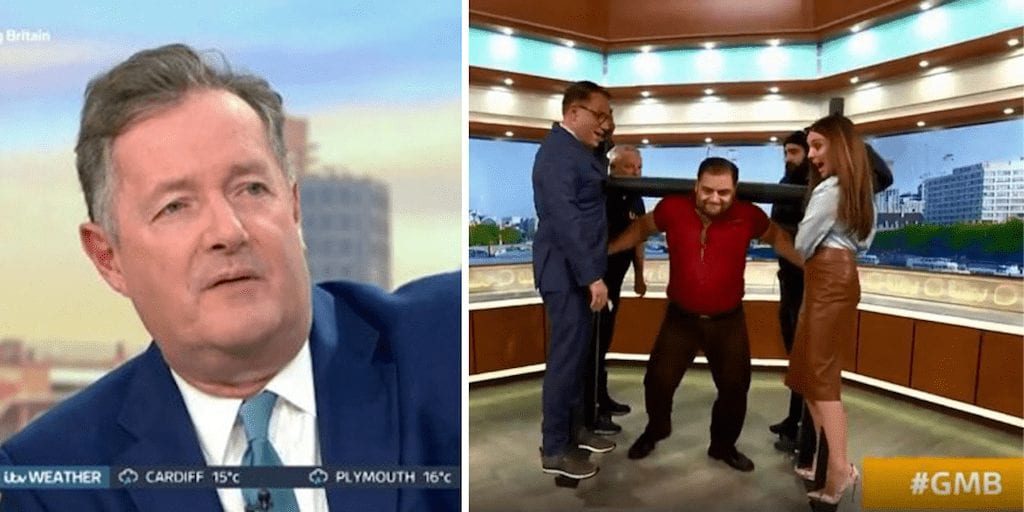 Vegan strongman Patrik Baboumian has convinced anti-vegan presenter Piers Morgan to watch The Game Changers – a documentary which showcases the benefits of a plant-based diet.

The German strongman competitor appeared on Good Morning Britain and carried four people across the studio to prove you don’t need meat to build muscle.

The vegan athlete posted a clip on his Instagram page, and wrote: “Yoke shenanigans with @piersmorgan | @susannareid100 | @lauratobinweather | @richardaarnold | and @lightningwilks After this Piers said he was definitely going to watch @gamechangersmovie #TheGameChangers #teamgamechangers.”

“Vegan power!” one person wrote, while another added “Yeah suck that Piers!”.

Piers Morgan has been a prominent vegan hater since he slammed Greggs for its launch of the infamous vegan sausage roll.

But maybe watching pro-vegan documentary The Game Changers could change his mind.

The documentary has already received rave reviews, and even turned some viewers vegan. The Game Changers is out in cinemas and available to download on iTunes.

During the trailer for the film, Arnold Schwarzenegger reveals he ‘ate a lot of meat’ in the past.

The movie has been heralded as a huge moment for veganism as it will prove the potential of vegan nutrition.