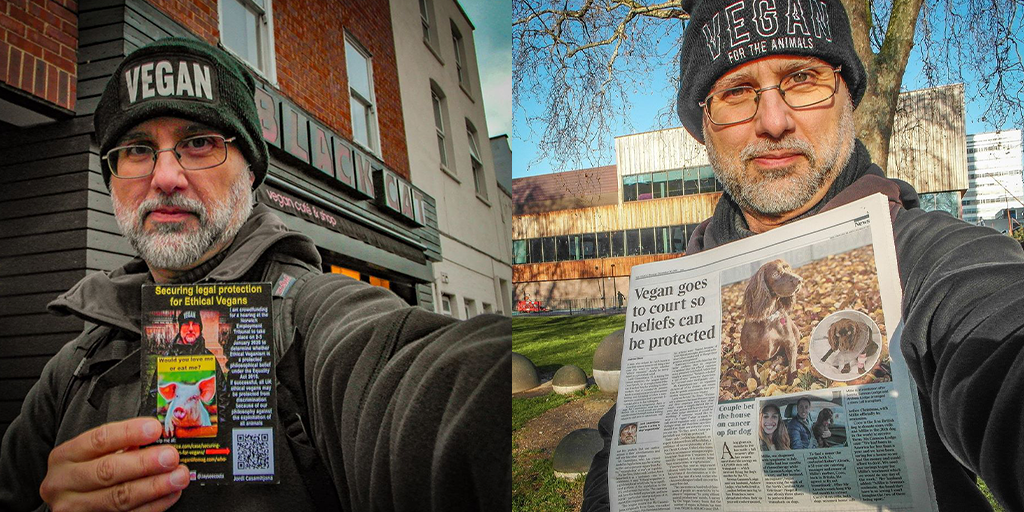 Ethical veganism has been recognised as a philosophical belief and now has legal protections against discrimination in the UK.

In a groundbreaking employment tribunal, vegan Jordi Casamitjana argued he was discriminated against by his employer for his lifestyle and beliefs.

The former employee of animal welfare charity the League Against Cruel Sports claimed he was fired after he exposed the charity for investing its pension funds in firms involved in animal testing.

The ruling at a tribunal this month does not settle his claims that he was unfairly dismissed, but was necessary to clarify if his veganism could be recognised as a philosophical belief akin to a religion.

The League Against Cruel Sports has dismissed his claims, explaining he was fired for gross misconduct.

Casamitjana said after the tribunal’s verdict: “I am not alone. Many people have supported me because they, or their friends, have experienced discrimination for being ethical vegans.

“Hopefully, from my dismissal, something positive will come by ensuring other ethical vegans are better protected in the future.”

Significantly for vegans across the UK, the ruling confirms that veganism should be legally protected under the Equality Act 2010 as a ‘philosophical belief’, and therefore factored into Casamitjana’s case.

In the buildup to the tribunal, Casamitjana told Totally Vegan Buzz: “This is larger than just my case. If I win, everyone benefits. It’s far greater than people imagine.

“Every vegan should be interested in the success of this.”

Casamitjana was supported from vegans from across the world to fund his case.

His victory means that any form of discrimination against an employee or person for being vegan is illegal in the UK.

“The direct implication is that nobody can be sacked or threatened to be sacked based on their beliefs. It will be easier for people to say ‘look, this belief is protected by law’,” Casamitjana explained.

“It would mean fewer people would be scared to talk about their beliefs.”

And it could have a huge knock-on effect on workplaces and big business, he argued.

“Companies would be legally obliged to provide vegan options. If they didn’t, someone could say ‘look, I know my rights’,” he told Totally Vegan Buzz last year.

“Companies would be forced to follow the laws as they wouldn’t want to risk having complaints.”

It could also have knock-on effects for schools, hospitals, prisons and other large organisations, he explained.

“Pubs wouldn’t be able to have signs saying ‘vegans not welcome’.

“Activists’ voices would be more heard and respected. They would know they can speak up when before they could have been scared. You could speak knowing the law protects you.

“Ultimately more animals would be helped.”

To qualify as a philosophical belief legally, veganism must be ‘genuine, be a weighty and substantial aspect of human life and behaviour and attain a level of cogency, seriousness, cohesion and importance’.

It has also been deemed worthy of respect in a democratic society, not incompatible with human dignity and not conflicting with the fundamental rights of others.

Casamitjana describes himself as an ‘ethical vegan’, and has not consumed animal products for 17 years.

He claimed he discovered his employer was investing its pension fund in companies that carry out animal testing.

What impact could this ruling have on veganism? Share your thoughts in the comments section below!