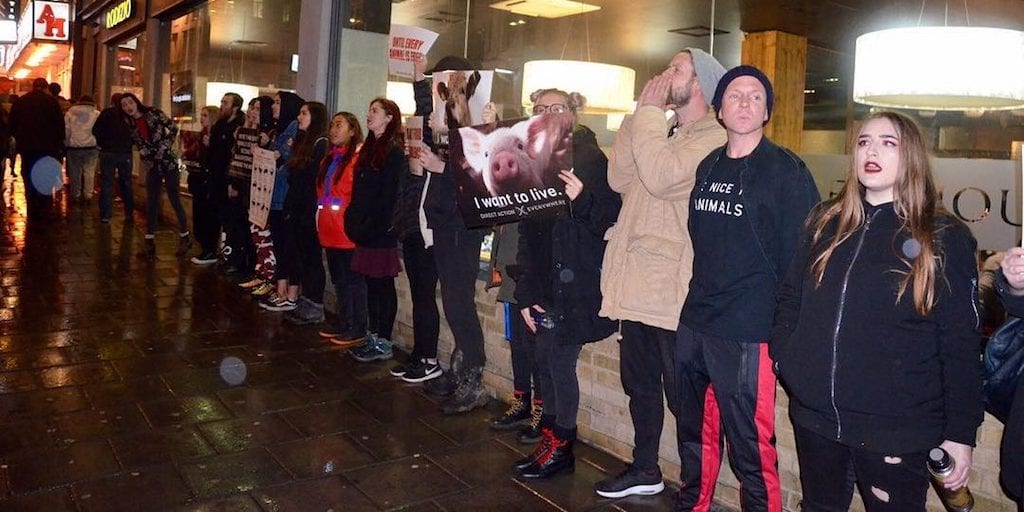 Animal rights activists played audio of animals being slaughtered to diners at a Brighton steakhouse in a protest against the meat industry.

Activists displayed anti-meat industry images and slogans, and chanted: “What do we want? Animal liberation. When do we want it? Now!”

A spokesman for DxE said the group’s actions are ‘about disrupting normalised activities that depend on animal exploitation and suffering in a very public and non-violent way’.

“Through these actions we aim to get the conversation at the forefront of people’s minds and get people questioning everyday norms,” the spokesman said.

“It may seem extreme, as yes it is making a big statement, but when we have industries built on the mass killing of innocent animals, we have no time to lose. We need to expose the truths and the industry will crumble. Speciesism needs to end.”

Sussex Police was called to the scene at 7.10pm due to reports of about 20 people protesting.

They were not committing any offences and were allowed the right to peaceful protest, police explained.

“This kind of activism is not necessarily targeting those individuals inside that steakhouse, a huge part of its success is getting press coverage and a wider audience seeing it after the event occurs.

“Human beings sat in a restaurants munching on chopped up bodies is what’s really extreme. Legality does not equal morality and using animals in the way we do is not moral.”

What do you think of this protest? Tell us in the comments section below.