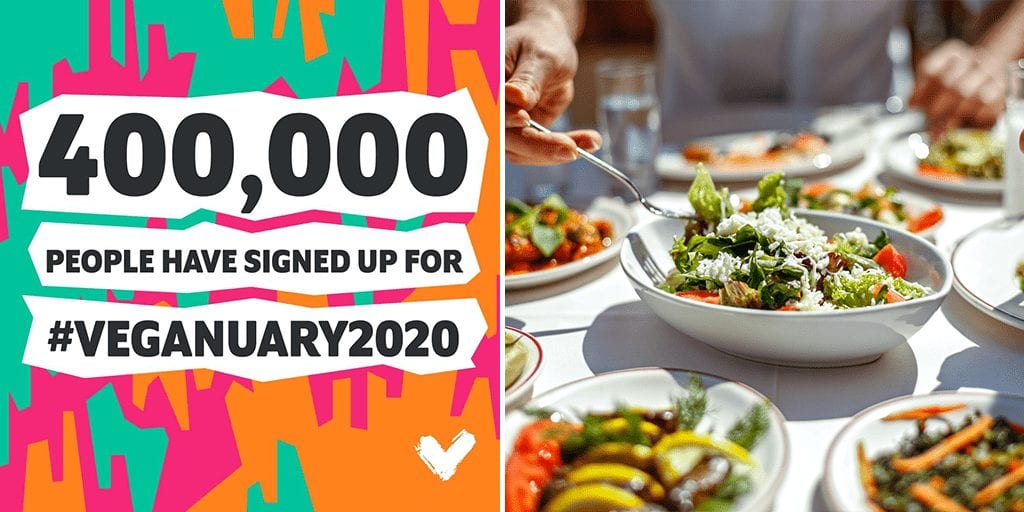 Vegan charity Veganuary has revealed that the 2020 campaign was a massive hit with 400,000 participants. It also bagged the Plant Powered Initiative Award for its efforts in spreading the vegan message.

While the Veganuary team wanted to “inspire 350,000 people to live healthier, reduce their carbon footprint and save animals’ lives by eating vegan for January and beyond,” the final figures released for its 2020 campaign show that over 400,000 people participated far exceeding the campaign’s intended target.

? O.M.G. #Veganuary2020 has surpassed all of our expectations! Thank you for all of your support and help in making this the most epic Veganuary yet. We are humbled by what we have achieved together. A vegan world is on the horizon. ??⁠ ⁠ Don’t forget, It’s never too late to join us! You can sign up to try vegan at anytime ? www.veganuary.com/register or click the link in our bio.⁠ ⁠ ⁠ ⁠ ⁠ ⠀⁠ ⁠ ⁠ ⁠ ⁠ ⁠ .⠀⁠ .⠀⁠ .⁠ #Veganuary #Veganuary2020⁠ #Vegan #Vegans #PlantBased #CrueltyFree #VeganForLife #VeganAF #VeganMovement #VegansOfInstagram #VeganLife #VeganLifestyle #VeganForTheAnimals #VeganForHealth #VeganForThePlanet #VeganForTheEnvironment #VeganForEverything ⁠ #GoVegan #TryVegan ⁠ #VeganShare #VegansOfIg⁠ #VeganNews

The charity group also bagged the Plant Powered Initiative Award with a staggering 40% voting in its favour.

Among the top brass who joined the 2020 campaign included rock legend Brian May, former Dragon Deborah Meadan and actor Rebecca Callard, all of whom intend to follow the lifestyle post January after witnessing its benefits.

Queen Legend Brian May who wanted to try Veganuary for his health, animals and the planet was so happy with his dietary reform that he told his 2.1 million Instagram followers he was heading for a vegan February.

“VEGANUARY!!! Yes! It’s done – and I loved it. Not a morsel of meat or fish or dairy passed my lips. It was so much easier than I expected and gave me so much,” he wrote on his Instagram post.

So I am now plunging in for a Vegan February!!! I certainly don’t feel like giving up this new journey of discovery. Who’s with me?”

Rebecca Callard confirmed she intended to continue on the diet that helped improve the planet: “I’ve had some of the best food I’ve ever eaten this month – notably Mildreds and the Greggs Vegan Steak Bake.

“I’m a pretty awful cook but even I’ve managed to knock up some decent stuff in the kitchen – there’s such a variety available everywhere.

“If it’s not even putting me out then there’s definitely no question of not sticking to an option that affects the world around me and our future.”

Veganuary also witnessed many food giants, restaurants and supermarkets launching their own vegan ranges to offer more choices and cater to the growing demand.

M&S expanded its vegan range with 100 new plant-based meals, snacks and drinks in addition to its popular Plant Kitchen range.

According to April Preston, Director of Product Development at M&S: “Veganism is a trend that we are absolutely loving at M&S.

“As our customers continue to experiment and adopt more flexitarian diets, we too are having fun creating new products to fit within this.”

High street bakery Greggs, who launched its vegan steak bake after fans begged the company to create more vegan versions of its best-selling products commented: “The launch of our Vegan Steak Bake has been a huge success, even bigger than we had originally anticipated. Due to the success of the launch we’re now working on rolling the Vegan Steak Bake out to all shops as soon as we can.”

‘Difference for animals and the planet’

Summing up on the outcome of the 2020 campaign, Veganuary’s Head of Communications Toni Vernelli said: “With the link between animal farming and the climate crisis making headlines nearly every day we expected Veganuary 2020 to be the biggest yet, but it exceeded all of our expectations.

“We applaud everyone who took part and encourage them to continue eating vegan food as often as possible.

“And we’re grateful to all of the businesses embracing Veganuary and making it easier for more people to eat more plant-based food more often.

“Together we are making an enormous difference for animals and the planet.”

Where will veganism be in the next 10 years? Share your thoughts in the comments below!