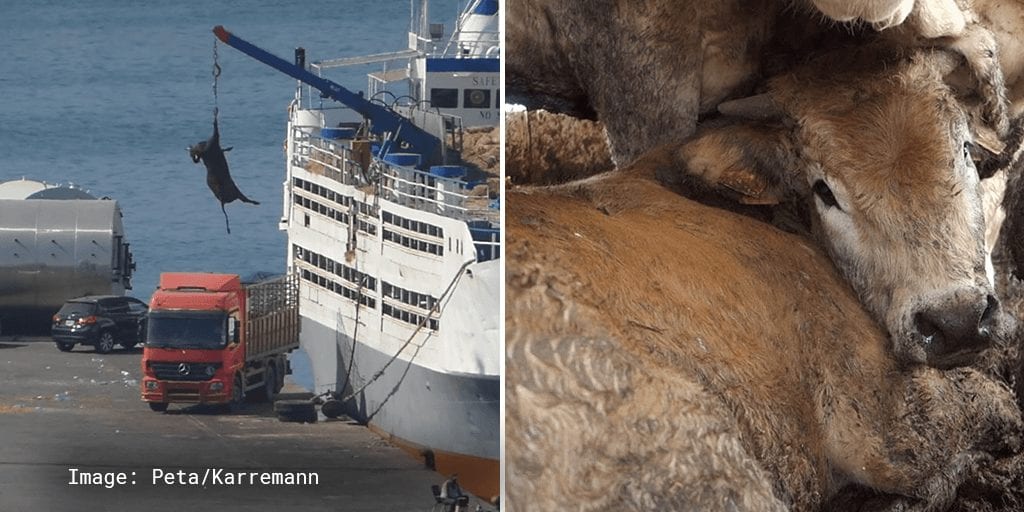 ‘As the world reels from a deadly virus that originated in humans’ cruel treatment and butchery of animals, this deeply disturbing video footage should set off alarm bells’

A joint investigation by PETA Germany and journalist Manfred Karremann has exposed the extreme cruelty endured by animals like cows and sheep for the global leather trade.

The horrific footage reveals how animals used by the international leather industry are “commonly kept, transported, and killed in filthy, crowded conditions in which devastating zoonotic diseases can develop and spread,” said PETA in a statement.

According to PETA, more than 1.4 billion cows, goats, and sheep – and millions of other animals – are killed for leather worldwide every year.

In the Karremann footage, animals are seen being shipped for weeks-long journeys from Europe and South America overseas and by lorry to abattoirs in Iraq, Lebanon, Turkey, and other parts of the world where they are slaughtered for the meat and leather industry.

The skins of these slaughtered animals ultimately end up on store shelves in Europe and the US.

During transport, the animals are exposed to the vicissitudes of weather with no protection and denied sufficient food and water. While some are grievously injured many are trampled to death.

The video footage also shows weak or injured animals being hoisted off a docked ship with cranes, their entire weight hanging by one leg (a process that can break their legs and dislocate their joints) and then dropped onto an abattoir-bound truck.

After reaching the abattoir, the tired, hungry, and scared animals are brusquely pinned to the ground or tied up before their throats are slit.

“As the world reels from a deadly virus that originated in humans’ cruel treatment and butchery of animals, this deeply disturbing video footage should set off alarm bells,” said PETA Managing Director Ingrid Newkirk.

Urging people to avoid leather goods, she added: “Animals killed for leather endure enormous pain and suffering, and its production poses a risk to human health. PETA is urging shoppers to avoid it like the plague.”

The animal rights group encourages people to ditch animal leather in all forms because it not only causes animals to suffer, it is also one of the most environmentally damaging products in the world.

Acres of irreplaceable rainforests are destroyed to raise cows and grow their feed and the animals’ methane emissions are one of the leading contributors to climate change. In addition, numerous chemicals such as chromium and formaldehyde are used in the tanning process, which poses a danger to both the environment and humans.

Instead, PETA recommends switching to sustainable vegan leather made from recycled plastic, cork, or even pineapple leaves, mushrooms, grapes, apple peels, or other fruit waste which “mimic the properties of animal-derived leather without the cruelty, risk of transmissible disease, or environmental destruction.”

Share this story to reveal the gruesome nature of the leather industry.