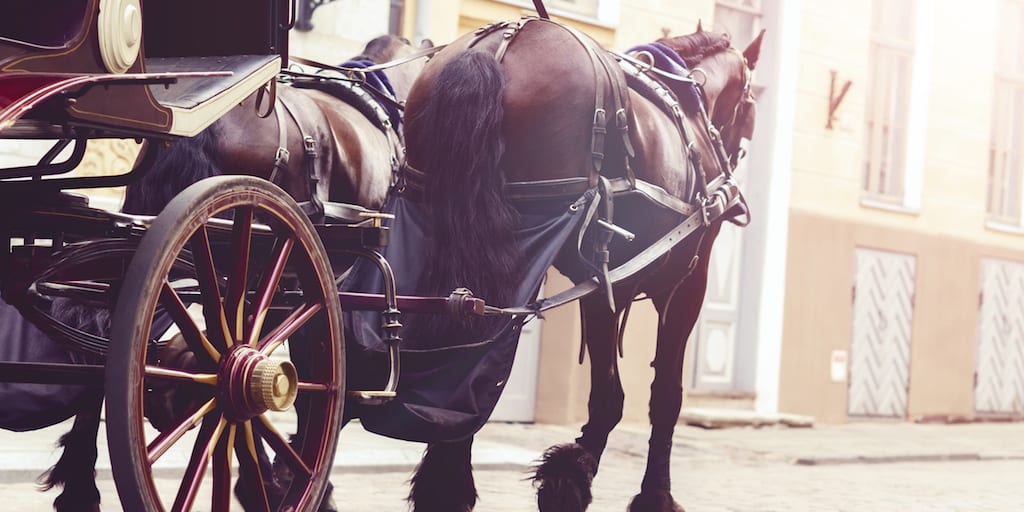 A disturbing video has raised concerns about horse welfare and prompted renewed efforts for animal protection after a carriage horse collapsed in Central Park, New York.

A pedicab driver captured the painful scenes of a horse stumbling onto a roadway, and struggling to get back up before finally collapsing in Central park on a Saturday afternoon.

The 12-year-old horse named Aisha had reportedly completed her first ride of the day and was waiting for her next one inside the park around 7th Avenue when her hind legs suddenly gave way and she staggered forward before falling to the ground.

This carriage horse from Clinton Park Stables is seen stumbling and unable to straighten their back legs in Central Park earlier today.

After years of doing nothing for carriage horses, will @NYCCouncil finally protect them? cc: @CoreyinNYC pic.twitter.com/EzSgvxoCkb

“The horse showed sudden signs of distress around 12:30 pm on Saturday after doing a single ride and then waiting for approximately an hour and a half at the 7th Ave carriage stand,” said a spokesperson for the Historic Horse-Drawn Carriages of Central Park.

“The vet and our emergency horse trailer were called immediately, and the horse unhitched and unharnessed.

“She progressively and rapidly weakened in her hind end and unexpectedly collapsed.

“The trailer arrived within 10 minutes of the call and, since the horse could not stand, she was slid into the trailer, following large animal rescue protocols, and returned to her stable on 52nd St.”

‘Carriage horses are in a crisis’

The unfortunate incident has sparked a row with demonstrators and campaigners urging the law to end the cruel practices of the carriage industry.

A group of New Yorkers for Clean, Livable, and Safe Streets (NYCLASS) demonstrators lined up at Central Park for an ‘emergency rally’ on Sunday.

Edita Birnkrant, executive director of NYCLASS said: “Instead of calling a qualified vet, to help this horse, several carriage drivers tied him up with ropes, shoved, pulled him into a trailer and they took him back to the stable.

“This video is just the latest disturbing piece of evidence we’ve seen showing how poorly these horses are treated and what they go through on these busy city streets,” added Birnkrant in a statement.

“New York City’s carriage horses are in a crisis. They are overworked, under cared for, and put in dangerous situations every day with no accountability when things like this happen.

“This is an industry out of control. That’s why we are calling on all the authorities who have the ability to fully, immediately shut down this abusive industry. We need a third-party investigation. It cannot be the very city agencies that are so inept to allow this abuse.”

However, the carriage association insisted that it followed large-animal rescue protocols and a veterinarian and an emergency horse trailer were on call to take care of the fallen horse.

The group instead accused the activists of “exploiting this tragedy to further their anti-horse agenda during our time of grief and shock.”

According to the group, Aisha seemed to suffer a cardiac arrest and this could happen to any animal, anywhere and anytime.

“Medical emergencies can happen to the healthiest horses, receiving the best, highly-regulated care,” the association said in a statement.

Christina Hansen, a spokesperson for the NYC Carriage Industry added that after assessing the situation, the veterinarian advised euthanizing Aisha as her condition deteriorated further.

“Her regular vet was able to begin assessment and treatment within an hour,” said Hansen.

“Unfortunately, she was never able to stand… Her owner, in consultation with the vet, made the difficult but humane decision to put her to sleep.”

His tweet drew several comments from followers urging him to ban the cruel practice.

“They should be banned. This is animal abuse!!! Animals used as rides and tourist attractions are not what’s best for animals. It’s time to do the humane thing and stop using animals this way for our entertainment,” added another.

The video of a horse collapsing and dying in Central Park yesterday is painful and says so much about a persistent problem.

We’ve made real progress in animal welfare but we must go further. The NYPD’s Animal Cruelty Investigation Squad is on the case and WILL get answers.

There should be an immediate investigation into what happened to this horse and the cause of death.

This video is painful to watch and the public deserves answers. https://t.co/9NKvqWJgv8

Share this story to reveal the pitiful plight of carriage horses and if you want the industry to be banned.