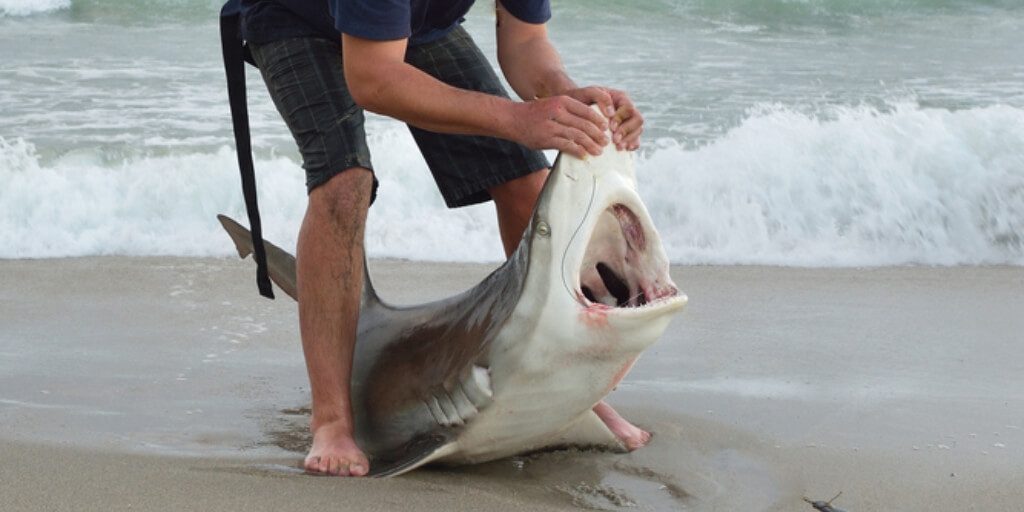 One of the fishermen said the group was having “just a bit of fun”.

Three fishermen have come under fire for posting a video of them pinning down a shark and using its teeth to open a can of beer.

The clip was originally uploaded to TikToker Wyatt Dallison’s OutdoorChaos account, which has a following of more than 58,000.

It shows one man grabbing the struggling animal – a sand tiger shark – by the snout to stop it from closing its mouth while another throws a can at its exposed teeth.

The helpless animal is seen writhing and gasping for breaths as it struggles to free itself and dislodge the can of Bud Light from its jaw.

It ends with the callous angler, who smashed the can against the shark’s teeth, picking the tin off the sand and chugging it down in delight.

While it is illegal to remove a shark from the water, the group snared it on their fishing trip in Florida.

“Bro, the shark just got abused. He’s trying to breathe,” wrote one user.

Another said: “Taking a sand tiger out of the water. Illegal. Recorded yourself doing a crime. Brilliant.”

Commenting on the video, the National Marine Fisheries Service, which is responsible for the supervision of the US’s ocean resources, said: “All prohibited sharks must be released in the water with a minimum of harm.

“Practicing careful catch and release is important because it can drastically decrease the number of fish that die after being released.

“Gravity above the water’s surface exerts great stress on the fish and lowers its chance of survival after release.

“We encourage possible violations to be reported to the NOAA Office of Law Enforcement Hotline.”

Cody Scott – one of the trio in the video – said “absolutely no sharks were harmed” in that stunt. He added that he was unaware of the rule prohibiting the removal of sharks from water and had received a “warning from the game warden after the video was taken.”

Wyatt Dallison, from Pine Grove, West Virginia, added the stunt was “just a bit of fun”.

“Of course we are not trying to hurt any fish, but I can understand how people can see this as disrespectful,” he said.

“It probably wasn’t the greatest idea, but you know at the end of the day we did everything we could to make sure that shark was ok.”

This isn’t the first time social media influencers have been criticized for abusing marine animals. A couple of months ago, an Australian tradie caused a stir after an image that appeared to show him surfing on top of a giant crocodile with a rope around the animal’s snout surfaced online.

Share this story: Fury as viral video shows fishermen pinning down shark to use its teeth to open can of beer.