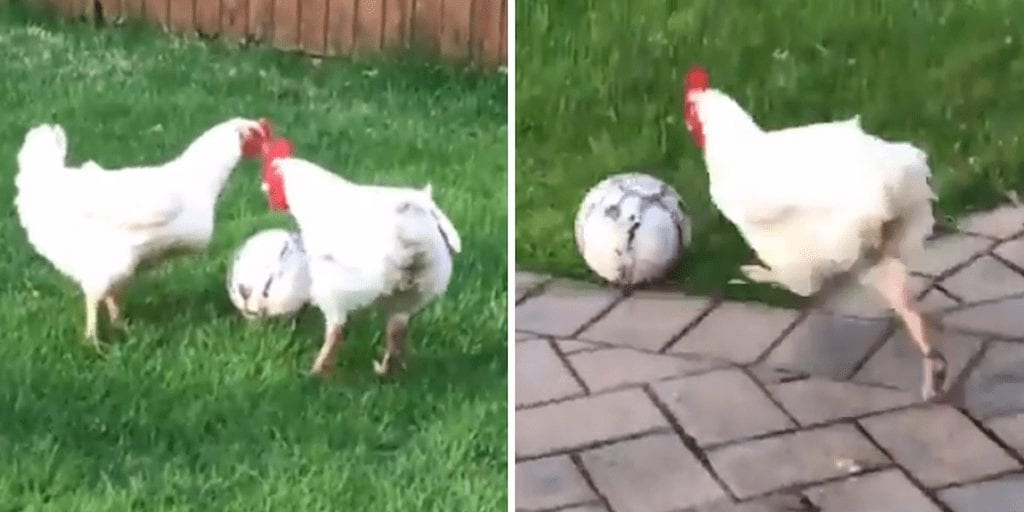 A video has surfaced on social media which clearly displays why chickens deserve our compassion.

The clip shows two chickens playing with a football – chasing it around a garden as their owner kicks it across the grass.

The video was posted on Twitter by animal rights activist John Oberg, who wrote: “Chickens playing soccer might just be what someone out there needs to see to understand that chickens deserve our respect, compassion, and consideration!”

Twitter users celebrated the video and urged non-vegans to consider the lives of chickens before the eat animal products in future.

“Enjoy seeing the freedom and fun these beautiful birds are experiencing, rather than just for OUR consumption and personal use,” one person wrote.

Another added ‘I wouldn’t have thought of it. My son has played ball with a cow before, but not chickens. Good stuff!’ while one tweet read ‘they deserve our respect’.

Many people don’t realise that animals of all kinds love to play just as much as humans, cats or dogs.

Another viral video is clear proof that cows love playing, too. It shows an excitable cow bounding through a field after a ball, and bringing it back to its human friend.

The video has now been viewed 5 million times on YouTube, while it resurfaced on Reddit titled ‘What a happy cow’ this year, and has been upvoted 30 thousand times.

Videos such as this are vital in showing the world the truth about animals which many people view as meat.

They’re sentient, feel pain and have emotions, just like me, you, my dog and your cat.

“Cows are basically dogs,” the original poster commented on Reddit. “I want one,” another added.

And the video made some people rethink their lifestyles.

“I’m no vegan nor vegetarian, but whenever I watch these videos I just feel so hypocritical,” one viewer admitted.

Share this video to show the world that cows and chickens deserve our compassion.