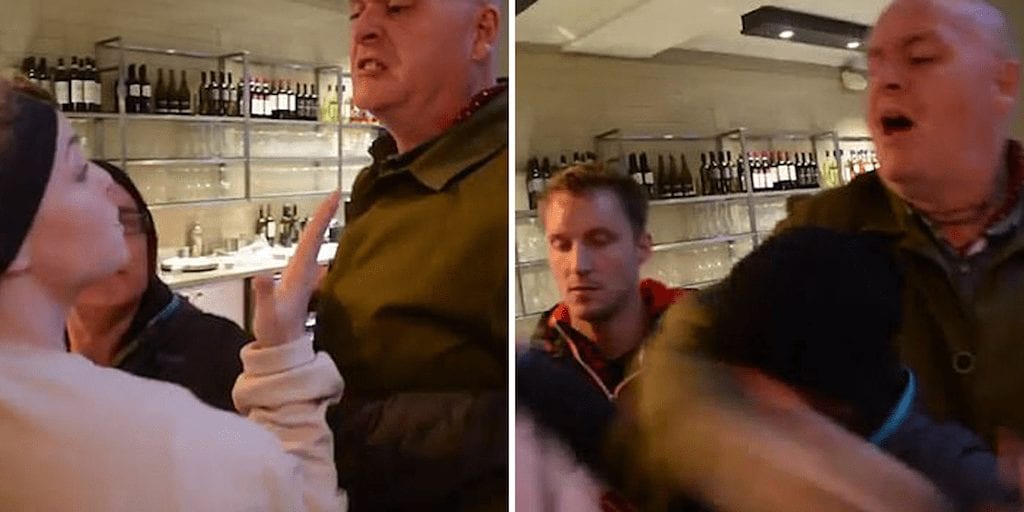 A male customer at Pizza Express punched a peaceful female vegan activist in the face for protesting against animal cruelty in a Brighton restaurant.

But one angry customer confronted the group and said ‘You’re scaring these people, f*** off now’. As a woman turns around to confront him, he strikes her in the face and appears to say ‘punch’ as he makes contact.

In a dramatic scene other diners and staff hold the man back as protesters continue to deliver their message.

The protesters hold up signs promoting Rose’s Law, which hopes to create an animal bill of rights.

A spokesperson for DxE Brighton said in a statement: ‘We must stand together against speciesism, but some are not ready to hear our message of equality and justice.

‘Today, whilst bringing this message to diners at the chain restaurant, we were violently attacked. It is not surprising that those consuming violence are quick to partake in it too.

‘This kind of response will not deter us, we will not back down in the face of repression; not by the public, not by the police, nor the industries they protect.’

Activists went on to chain themselves together in front of Brighton Town Hall to promote Rose’s Law.

What do you think of Direct Action Everywhere’s form of activism? Share your thoughts in the comments section below!