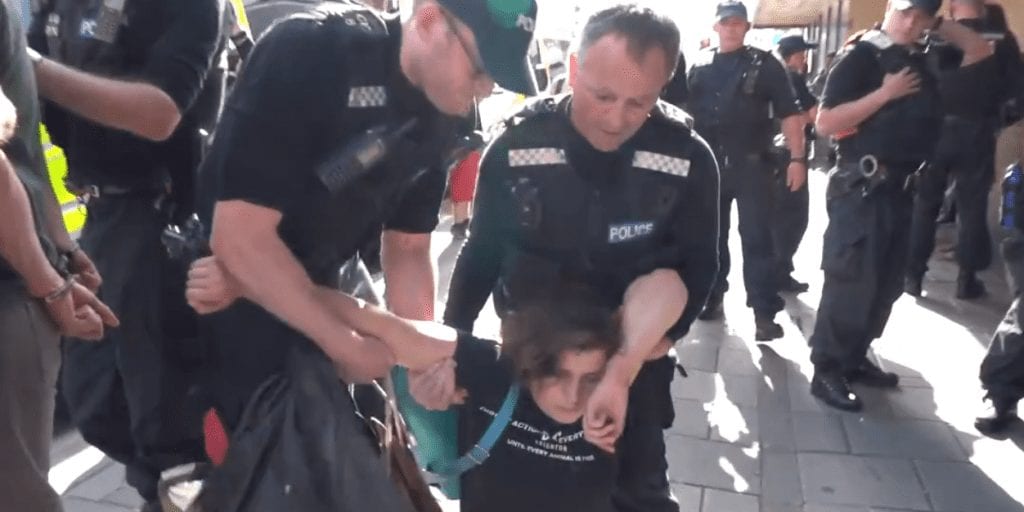 Nine activists were arrested amid a dramatic protest at Waitrose supermarket in Brighton, UK.

Demonstrators protested against the sale of animal products at the supermarket, and lined the meat and fish section while holding signs with slogans such as ‘meat is murder’.

Around 40 activists were involved in the protest which included speeches being read out to shoppers on a megaphone.

A spokeswoman told Totally Vegan Buzz in a statement: “We are targeting Waitrose because they use humane-washing messaging in order to sell their animal products. Treating animals nicely does not justify killing them and using their bodies for your own gain. They are individuals.”

The protesters from Direct Action Everywhere have targeted the supermarket in Brighton once before as well as ‘ethical’ supermarket Hisbe, McDonald’s and Nandos.

“We live by an assumption of human superiority. The assumption that because we are human, we can take someone’s life who does not want to die, simply because they are not human.”

Police were called to the scene and were seen in a video arresting protesters and dragging them away from the supermarket.

“Officers attended Waitrose, in Western Road, to reports of a large group of people being involved in an animal rights protest just before 5pm on Saturday.

“Police provided an immediate response which resulted in nine members of the group being arrested for failing to provide their names or addresses.

“All nine remain in custody and the investigation remains ongoing.”

The operation commander Chief Superintendent Lisa Bell told Brighton & Hove News: “We worked with the supermarket staff and organisers to facilitate peaceful protests that balance the rights of those to protest without disproportionately affecting the rights of the general public.

“However, disruptive, criminal and intimidating behaviour will not be tolerated and we will use our police powers to act on this.”