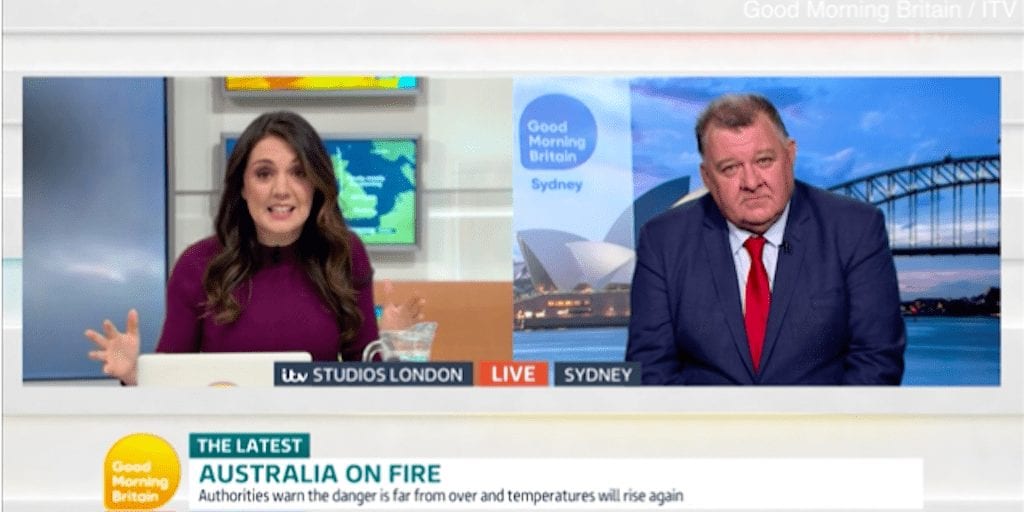 Weather presenter on Good Morning Britain Laura Tobin has called out an Australian politician for being a ‘climate change denier’ in a live TV confrontation.

Tobin challenged MP Craig Kelly during a debate about the bushfires which have devastated Australia.

The debate clearly infuriated the presenter as she cut across Kelly after the MP said fires were caused by droughts and inadequate forest management rather than climate change.

The Sydney MP said: “You have to look at the science, but one of the factors contributing are the fuel loads. Every commission post bush-fire says we need to reduce them, but we always fail to do so.

“Our lifestyle depends on fossil fuels, it can’t be done without it. Some politicians have hijacked the debate to push their ideological barrow but what causes fires? Drought and build-up of fuel loads.”

Tobin is an experienced meteorologist, and she hit back at Kelly’s comments by explaining that Australia is in the middle of its hottest summer on record primarily due to climate change.

“We want everyone in the world to lower the global temperature rise by 1.5C, you can’t even commit to 2C,” she said.

“You have the second highest carbon emission on earth and you are burying your head in the sand. You’re not a climate sceptic – you’re a climate denier.”

“The fires are unprecedented and there’s no denying the climate change – lives are being lost. No one hasn’t been touched,” Cash said.

“So much of this is because of a very, very slow reaction to the PM who didn’t listen to 20 fire chiefs warning six months ago exactly what is happening now – and sure enough, it has happened.

“He’s failed the firefighters. He was warned there weren’t enough gas masks, they’re in there ill-equipped and the PM hasn’t gone on the phone to Donald Trump.

“Where are these Hercules planes that dwarf what we have that can drop tonnes of water?’ Mr Cash added, before Piers assured him that he would be tweeting the US president later in the day to call for help.”

What do you think of Australia Prime Minister Scott Morrison’s response to the bushfires? Share your thoughts in the comments section below!