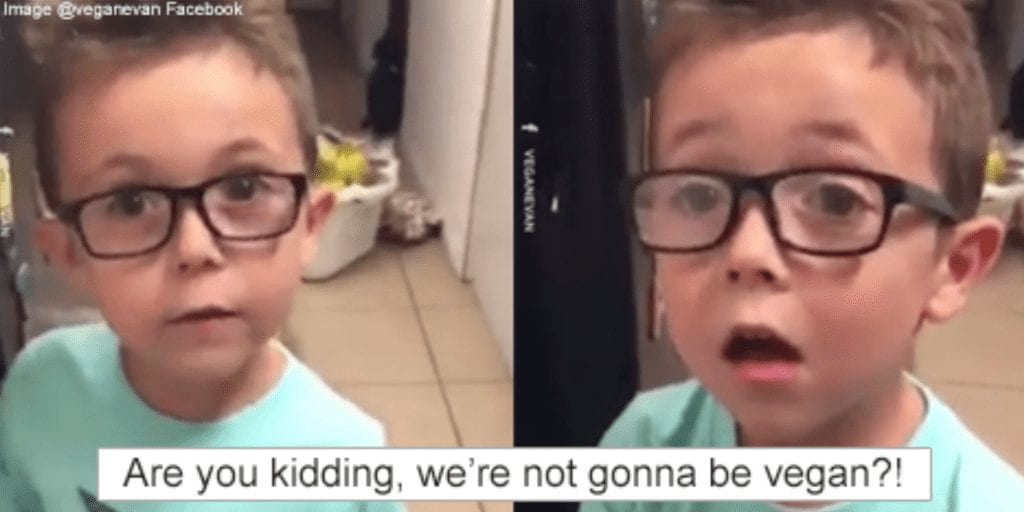 Commitment to veganism can start at any age, and many people only fully embracing the ethical, environmental and health benefits much later in life.

But one young vegan boy is ahead of the game at a young age, and has become an internet sensation for his plant-based rants.

Vegan Evan was filmed by him mum after she told him the family would be quitting the diet (but she was only messing around, of course).

“Are you not kidding?” Evan asks.

“You should stay vegan for the rest of your life, and I will,” Evan says.

The compassionate boy argues that pigs are ‘smarter than dogs’ and all animal lives matter.

His mum says that he’s going to have to eat meat because she buys the shopping, and he’ll need it for the protein.

“Vegan food has a lot of nutrients and stuff,” Evan exclaims.

“Way to go my man. Plant strong, Vegan strong. For the animals, for health, and for the benefit of the entire planet.”

Evan was named PETA’s cutest vegan kid in 2016, and his parents have posted many videos on his Facebook page.

“YOU are my new favorite person…. what an awesome vegan spokesperson you are,” another viewer wrote.

“Thank you for being such a powerful voice for the animals!! you rock!!”

“When a little boy is smarter than the majority of the world,” another added.

What do you think of Vegan Evan’s rant? Share your thoughts in the comments below!