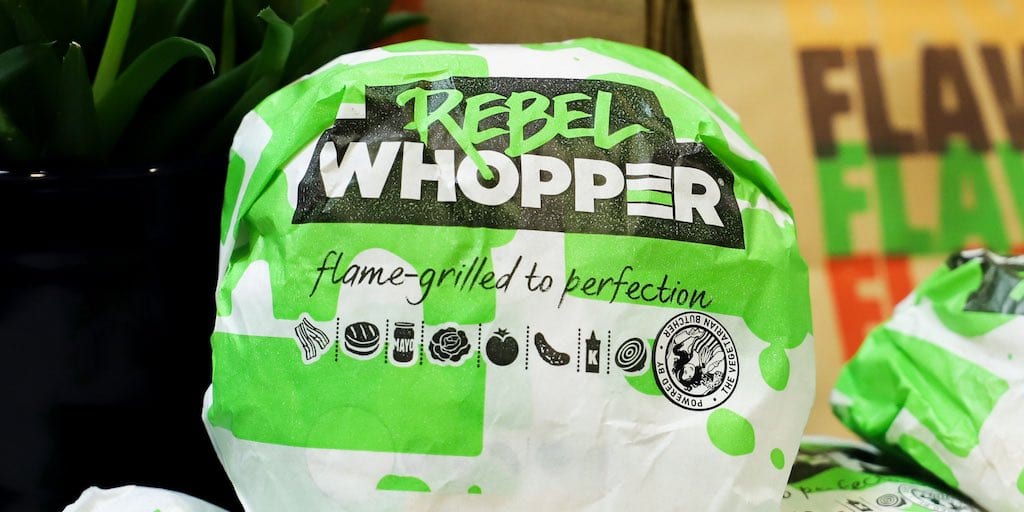 The Advertising Standards Authority (ASA) has banned Burger King’s ads featuring the Rebel Whopper because it misleads vegans and vegetarians.

Burger King launched The Rebel Whopper in January to coincide with Veganuary and posted several adverts on Twitter, Instagram and Facebook promoting it as the fast food chain’s first 100% plant-based burger.

At the time, BurgerKingUK posted an image on Instagram and captioned it: “You asked and we listened. Introducing the Rebel Whopper, our first plant-based burger!”

You asked and we listened. Introducing the Rebel Whopper, our first plant-based burger! ? Pick up yours exclusively with the app on the 6th and 7th and then available as usual from the 8th. T&Cs apply.

The brand posted an almost identical advert on Facebook, adding the words “Powered by the vegetarian butcher” with a disclaimer “*Product is cooked alongside meat products” added in small print at the foot.

The 3rd ad described the Rebel Whopper as the “taste of being woke” and “powered by the vegetarian butcher”, with a smaller text beneath stating: “T&Cs apply.”

However, the soy-based version of the chain’s Whopper beef burger was being cooked on the same grill alongside its meat counterpart and had an egg-based mayonnaise spread making it unsuitable for those following a completely vegan diet.

The ads received bad press from several consumers, who blasted the chain on social media.

“Plant-based but cooked on the same grill as the meat? What is the point? Look to other businesses who’ve done brilliantly capturing a new plant-based customer… this is just ridiculous,” one person wrote.

“What’s the point as vegans and vegetarians can’t eat it as you cook it with dead animals,” another added.

Others complained to ASA stating the ads were misleading and wanted them removed.

The advertising watchdog reviewed the ads and said: “The green colour palette and the timing of the ad and product release to coincide with ‘Veganuary’ contributed further to the impression that the product was suitable for vegans and vegetarians.

Although some of the adverts included the “cooked alongside meat products” disclaimer, ASA explained: “We considered it was not sufficiently prominent to override the overall impression that the burger was suitable for vegetarians and vegans.”.

The watchdog added that Burger King had also failed to make it apparent that its new product was dressed with egg-based mayonnaise.

Finally, ASA after warning Burger King not to imply a product suitable for vegetarians and vegans if it was not declared the adverts must not appear again in its current form again.

“We concluded that the ads were misleading,” it said.

“The ads must not appear again in their current form.”

However, BKUK Group Ltd, the chain’s parent company said it had been “clear and transparent” in its marketing.

The chain maintained that the patty supplied by the Vegetarian Butcher was 100% plant-based and any customer who did not want mayonnaise could exclude it from their order.

It also mentioned that details of the small print had been communicated to journalists, on social media posts and in dialogue with customers.

Share this news to let others know of the ASA’s decision.