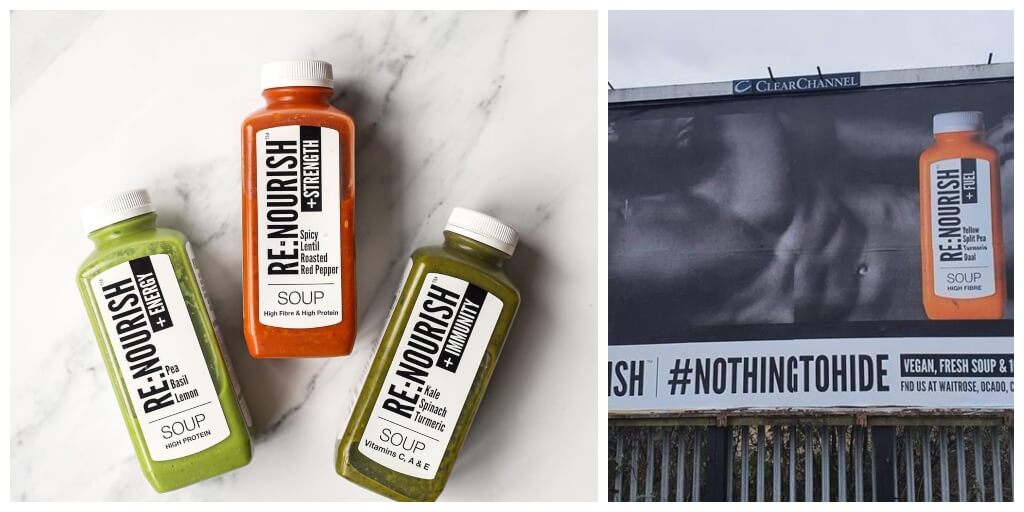 “Taking the image, the ‘#nothingtohide’ strapline and the placement of the bottle into account, we considered that the ad was likely to have the effect of objectifying the man by using his physical features to draw attention to an unrelated product.”

The advertising watchdog has banned a vegan advert following a complaint from a member of the public who found the ad “offensive and irresponsible”.

Re:Nourish’s January 2022 poster campaign hit city-centre streets depicting a bold model lying sideways facing the camera, with only a bottle of soup protecting his modesty. The majority of his face is cropped out, legs are slightly apart and his hand rests on his thigh.

At the end of the copy is the strapline: “Re:Nourish. #Nothingtohide. Vegan, fresh soup and 100% recyclable”.

The saucy black and white poster promoting the brand, was soon challenged by a complainant who deemed the advert was too ‘suggestive’ especially after seeing the bottle’s placement with an insinuating accompanying hashtag #NOTHINGTOHIDE.

According to the complainant, the advert breached standards on social responsibility, harm and offence.

The Advertising Standards Watchdog (ASA) also noted that the advert was  “gratuitous or overly sexualised”  and visible in a busy city centre, which made it even more likely to be seen by all members of the public including children.

“We acknowledged the ad had appeared on posters in city centre locations, which was an untargeted medium and where the image was likely to be seen by children and adults,” the ASA said in a statement.

“We understood that the posters had not been placed within 100 metres of any schools.

“We noted that the ad was for soup, and considered the image of a naked man bore no relation to the product advertised.

“While we considered the pose was only mildly suggestive in nature, we noted that most of the man’s head was cropped out of the picture, which invited viewers to focus on his body.”

The watchdog added: “We also considered the text “#nothingtohide” was likely to be understood as a pun about nudity, which some might also consider sexually suggestive.

“Further, we considered that this line, in combination with the placement of the bottle over the man’s naked crotch, would be understood as a clear reference to male genitalia.

“Taking the image, the ‘#nothingtohide’ strapline and the placement of the bottle into account, we considered that the ad was likely to have the effect of objectifying the man by using his physical features to draw attention to an unrelated product.”

In its defence, the brand argued that its #nothingtohide campaign model was in fact wearing underwear in the advert with the bottle lending more obscurity.

The health-conscious company added that the two city-centre locations had also been carefully chosen to “avoid causing offence based on local sensitivities.”

However, ASA, upholding the complainant’s case, concluded that the ad was irresponsible and likely to cause serious offence to some people.

It ordered that “the ad must not appear again in its current form.”

Speaking to The Grocer, a Re:Nourish spokesperson said: “The brand is disappointed by the findings of this ruling because we pride ourselves on making a positive difference to the nation’s health and acknowledge that healthy bodies come in all sizes.

“Our marketing, including the #nothingtohide campaign, reflects the bold, creative and confident culture of our brand, and is not designed to intentionally cause offence.”

The brand was founded in 2019 by nurse-turned-nutritionist Nicci Clark after a lightbulb moment inspired the founder to launch a grab and go soup range in a microwaveable bottle.

The is a revolutionary soup brand that prides itself on its ‘nutritionally balanced, plant-based, vitamin-packed’ recipes.

Last year, it was crowned the fastest growing soup brand in the UK after growing a whopping 248% during the pandemic.

Currently in its third year of trading, the brand is valued at £15M. Recently, it secured a £2m series A investment as part of its global expansion initiative.