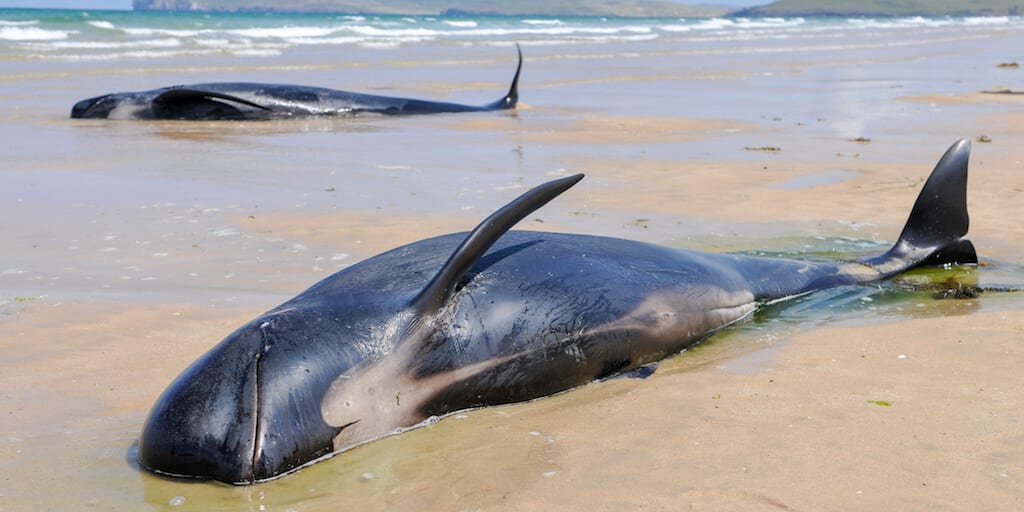 The mass stranding event has been dubbed the worst in Australia’s history.

Over 380 long-finned pilot whales have died off the coast of Tasmania, according to reports.

The event, which is being described as Australia’s largest recorded mass-stranding event saw nearly 500 whales stranded on a beach and two sandbars across an area 10 kilometres (six miles) long along the western coast of the island state.

Concerned authorities rushed to the rescue site after the first of the giant mammals were discovered floundering on Monday.

In the following days, a rescue crew of 60 conservationists, skilled volunteers and local fish farm workers have been wading in icy water trying to rescue as many whales as possible.

According to the team, a total of 50 whales have been saved and directed back to the ocean but a majority have already died.

“They’re focused on the job—it’s demanding work, some of them are up to their chest in cold water so we’re trying to rotate the crews,” Tasmania’s Parks and Wildlife Service manager Nic Deka said.

“There’s around 30 left still alive, but the good news is that we have saved 50.”

“As time goes on (the whales) do become more fatigued so their chances of survival reduces,” he added.

“But we’ll keep working as long as there’s live animals at the site.”

Despite studying the phenomenon for decades, the causes of mass strandings remain unknown.

According to some researchers, the pilot whales, who are extremely social and swim in tight pods may go off track after feeding close to the shoreline or by following one or two whales that strayed.

However, some scientists believe climate change plays an indirect role in the strandings of marine mammals like whales.

“Whales find their way through echolocation. Disturbances in the signals cause a whale to lose its way,” explained A Murugan, Professor of Marine Biology at V O Chidambaram College, Thoothukudi.

He added: “Climate change has an indirect effect on the echolocation mechanism of marine mammals such as whales. During climate change-triggered events such as high waves or high-speed winds in mid-sea, the natural echosystem is disturbed. While whales usually keep away from the shoreline during such events, they cause the echolocation mechanism in them to malfunction and cause them to think that the shoreline is a part of their territory. They thus head towards the shore and strand themselves.”

While the mass stranding phenomenon is considered a common casualty in  Tasmania and New Zealand, Peter Harrison, a professor at the Southern Cross University Whale Research Group, told NPR that such events are a matter of great concern when so many whales die.

“Quite often we only get to really see them when there are bad outcomes, such as this stranding event,” he said.

“We absolutely need some more investment in research to understand these whales in Australian waters.”

The authorities are now faced with the dilemma of dealing with the carcasses and are considering burying them in a landfill or towing them into open water.

Deka told The Guardian: “We do know we can’t leave them in the harbor because they will present a range of issues. We are committed to retrieving and disposing.”