Which vegan milk has the least impact on our climate? | Totally Vegan Buzz
Skip to content

Which vegan milk has the least impact on our climate? 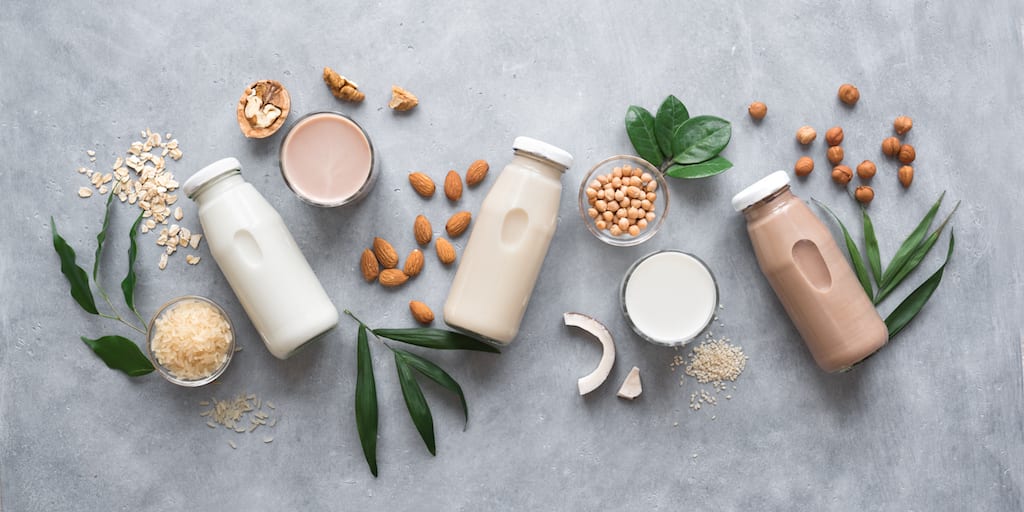 The rapid rise of plant-based milk has had a huge impact on the dairy industry but experts feel not all non-dairy options are sustainable and eco-friendly.

In fact, studies have also linked milk to health issues such as obesity, diabetes, heart disease, and some cancers.

Other concerns such as lactose intolerance, and dairy allergies, have led to a tremendous growth in the vegan milk sector that has been growing steadily to cater to the demands of consumers who want to ditch milk for health, environmental or ethical reasons.

There are several non-dairy options available these days, including oat milk, soya milk, almond milk, coconut milk, rice milk, hemp milk and pea protein milk but despite the obvious benefits, some food sustainability experts believe that not all dairy free milks are sustainable when produced in mass quantities.

According to Inhabitat, coconut milk, hemp milk, and oat milk are considerably low-impact, because they either need little water to grow or have lesser carbon footprint than other plant milks.

But, other parameters like taste, availability, and nutritional levels can significantly influence the popularity of the several plant-milk options available. Some of which have been listed below for a healthy comparison.

Oats have long been considered heart friendly; they are rich in antioxidants, fibre, help lower bad cholesterol, and regulate sugar levels in the blood.

Oat milk presents the same benefits, but you have to consume a handful of servings every day to get the benefits. Oat milk also contains vitamin B but is not rich in protein and minerals as other milk alternatives. You do get fortified oat milk, which adds in the missing nutrients.

Compared to other plant-based milks, oat milk has a low environmental impact as it adds less carbon to the atmosphere and requires very little water. Also, it can be grown in various parts of the world, making it a sustainable milk alternative.

In fact, according to Bloomberg Business, oat milk is the fastest-growing dairy alternative in the market today. Retail sales of oat milk in the US have soared from $4.4m in 2017 to $29m in 2019 and in the UK, volume sales increased by 71 percent between 2017 and 2018.

The nutritional value of soy milk almost matches that of cow’s milk.  It is very high in protein, and has plenty of macronutrients, carbohydrates, and fat. The main difference is that it does not have large concentrations of iodine, B vitamins, calcium or lactose.

Still, many people avoid soya because it of its phytoestrogen content that is claimed to  potentially mimic or imbalance human hormones.

“Soy has a relatively high concentration of certain hormones that are similar to human hormones and people got freaked out about that,” says Isaac Emery, a food sustainability consultant.

“But the reality is you would have to consume an impossibly large amount of soy milk and tofu for that to ever be a problem.”

However, almost 90% of soybeans are currently used to feed animals and produce oil, rather than to make soy milk. It requires large amounts of land and water resources hugely contributing to the deforestation of the Amazonian rainforest. Majority of soybeans are genetically modified to be pest-resistant; but that means it is loaded with GMO beasties. So, a soya milk fan must opt for organic variants.

Almonds are nutritious with good fats, flavonoids, vitamin D, and protein. However, they need copious amounts of water to grow-almost six times more than oats. A recent study  showed that a single glass of almond milk requires 74 litres and because it is mostly grown in California and Andalucia, its environmental impact is fairly high due to overseas shipping and California’s depleted water reserves. Still, it is better compared to dairy milk.

This variant has a characteristic taste and texture, which doesn’t appeal to everyone. However, it is very environmentally friendly requiring very little water and the trees help to filter carbon dioxide and fight greenhouse gas emissions.

Coconut milk is rich in good fats, however, has little vitamin and protein reserves. It also has a watery texture but you can opt for fortified coconut milk to make it a healthier and viable milk alternative.

While processing and transporting coconuts are the only things that impact the atmosphere, the pressure to meet global demand has led workers in the poorer regions of the Philippines, Indonesia and India being exploited and rainforest being destroyed to grow more coconut trees.

Rice is a thirsty crop; it needs a lot of water and also emits the largest amount of emissions behind dairy.  On the plus side, it is farmed all over the globe and new farming techniques are making rice less damaging to the environment.

Rice milk is the closest you can get to cow’s milk in taste and texture. It is rich in vitamin B and magnesium, naturally sweet, and suits people with lactose intolerance and nut allergies.

Hemp milk is a healthful milk alternative and a good source of proteins; It has important fatty acids such as omega-3, which is heart and skin friendly. It has a creamy consistency and a nutty flavor.

Hemp production is also quite eco-friendly. It hardly needs pesticides and sprays to combat weeds and pests. The plant helps filter out carbon dioxide from the atmosphere and each part of the plant is usable, resulting in less wastage than others on this list.

The pros related to plant milks far outweigh the cons and according to a 2016 Grand View Research report,  the dairy-alternative industry is predicted to reach $35 billion by 2024.

So, choosing to switch to any of the dairy free varieties available or being introduced in the market, is helping to make a difference to one’s health, animals and the planet.

“If you’re going with plant milk instead of animal milk, you’ve already addressed most of the environmental problems that your animal milk habit was causing,” adds Emery.

Which is your favorite plant-based milk? Let us know in the comments below!