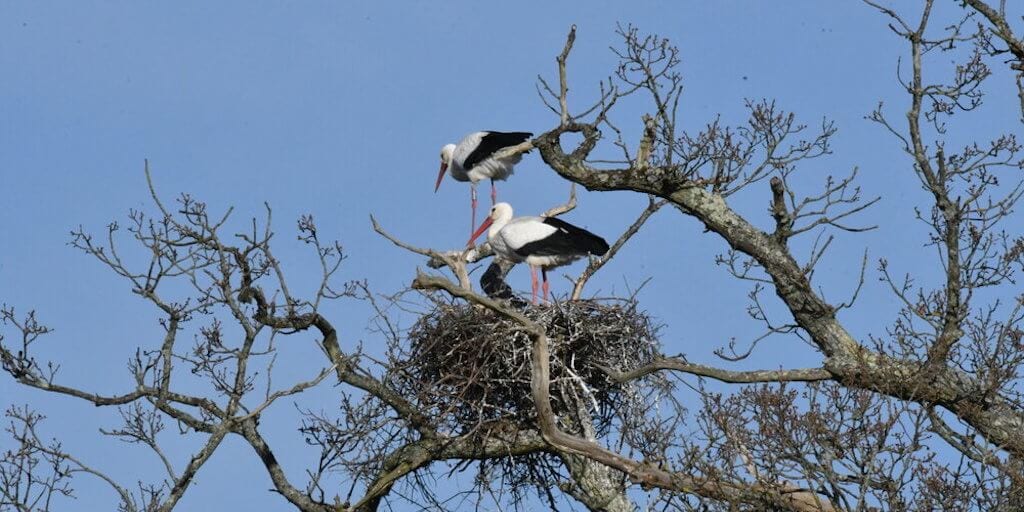 Storks, who often symbolize the birth of a new baby have hatched their own for the first time in centuries through a successful breeding program.

As part of the White Stork Project (WSP), nature conservation organizations, which include the Roy Dennis Wildlife Foundation, Cotswold Wildlife Park, Durrell Wildlife Conservation Trust, and the Warsaw Zoo along with private landowners have been working to restore breeding stork populations.

The project aims to reintroduce a breeding population of wild white storks in Britain using a combination of techniques, which include captive breeding and open-top predator-proof pens.

According to the Telegraph, more than 150 rehabilitated and captive-bred native white storks, absent since almost the 15th century, were introduced in the wild of southern England as part of the project.

Last month, WSP announced that there were five eggs in one of the nests at the Knepp Estate in West Sussex and the parents were seen incubating the eggs.

In the following update, the group declared that five baby storks hatched making it the first time that white storks have hatched in Britain since 1416.

“After waiting 33 days for these eggs to hatch, it was extremely exciting to see signs that the first egg had hatched on May 6. The parents have been working hard and are doing a fantastic job,” said Lucy Groves, a project officer for the White Stork Project, in a statement.

“It is incredible to have the first white stork chicks hatch in the wild for hundreds of years here at Knepp.  These are early days for the chicks, and we will be monitoring them closely, but we have great hopes for them.  This is just one step towards establishing this species in the South of England. It may be a small step, but it is an exciting one.

While the female stork is a bird from Poland and one of the storks belonging to the project, the male is believed to be one of the “20 or so vagrant storks” that travel to the country every year.

According to the WSP, the birds have declined over the years due to increased habitat loss and illegal hunting activities.

The WSP’s final goal is to restore the population to at least 50 breeding pairs in southern England by 2030.

On twitter the group wrote; “We are excited about the news of the first white stork chicks in hundreds of years.

“They are only recently hatched & take 60 days to fledge.”

We are excited about the news of the first white stork chicks in hundreds of years.

They are only recently hatched & take 60 days to fledge.

We are asking that people give them the space needed at this critical time & do not disturb the nesting sites at @KneppSafaris pic.twitter.com/RWiJruQePe

Ardent bird watchers have also confirmed seeing the chicks as they peered out of their nest for the first time.

Share this story to support the White Stork Project.