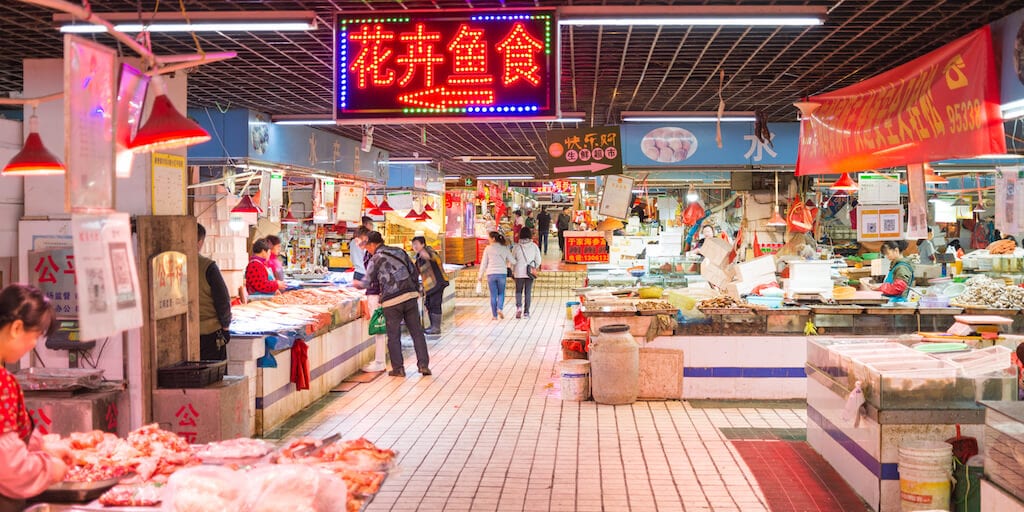 “Traditional markets, where live animals are held, slaughtered and dressed, pose a particular risk for pathogen transmission to workers and customers alike.”

The World Health Organization (WHO) is urging food markets to stop selling live wild animals as an ‘emergency measure’ against emerging infections.

The call comes after a WHO team visited China’s Wuhan city to investigate the origins of COVID-19 more than a year after the first outbreak.

In its latest report, WHO, backed by World Organisation for Animal Health (OIE) and the United Nations Environment Programme (UNEP), said that animals — particularly wild animals — “are the source of more than 70% of all emerging infectious diseases in humans, many of which are caused by novel viruses.”

Highlighting the risks of wholesale traditional food markets after the earliest known cases of COVID-19 were reported to be stall owners, market employees or regular visitors to the Wuhan live market in China, the agencies said: “Wild mammals, in particular, pose a risk for the emergence of new diseases. They come into markets without any way to check if they carry dangerous viruses.

“Traditional markets, where live animals are held, slaughtered and dressed, pose a particular risk for pathogen transmission to workers and customers alike.”

While the WHO recognized how traditional markets provide food and livelihoods for large populations, it advised that “banning the sale of the animals can protect people’s health — both those working there and those shopping.”

The agencies said the new report is to provide guidance “to reduce the risk of transmission of COVID-19 and other zoonoses in traditional food markets.”

It noted that “when wild animals are kept in cages or pens, slaughtered and dressed in open market areas, these areas become contaminated with body fluids, faeces and other waste, increasing the risk of transmission of pathogens to workers and customers and potentially resulting in spillover of pathogens to other animals in the market.

“Such environments provide the opportunity for animal viruses, including coronaviruses, to amplify themselves and transmit to new hosts, including humans.”

The guidance states that strengthening the regulatory basis for improving hygiene standards in traditional food markets is the second actionable measure.

Other actions suggested by the agencies include tougher regulations to control the farming and sale of wild animals heading to markets for human consumption as well as ensuring food and veterinary inspectors are adequately trained in enforcing new protocols.

“The WHO report provides a stark and sobering warning about the devastating public health risks of exploiting wild animals in unsanitary, overcrowded, and inhumane factory farm systems be that bamboo rats and badgers for human consumption, pangolins for traditional medicine, or raccoon dogs and mink for fur fashion,” Dr Peter Li, China policy expert at Humane Society International said.

“Cramming millions of animals together in these abusive industries creates a perfect petri dish for pandemics, and unless we ban farming for fur and the wildlife trade, we will continue to play Russian roulette with global public safety.”

‘Opening doors for the next pandemic’

However, PETA called WHO’s live-animal market crackdown – a ‘half measure’.

In response to the report, PETA President Ingrid Newkirk said: “The World Health Organization (WHO) has now taken one of the two steps that PETA requested of it during a solid year of appeals… “

She added that while the agency was recommending a suspension of the trade-in live mammalian wild animals, it was “ ignoring the plight of chickens, ducks, fish, and frogs who are caged and slaughtered in filth and leaving the door open for the next pandemic to emerge.”

“Every live-animal market must close, whether it sells bats in Indonesia or birds in Brooklyn,” she said.

Share this story: WHO calls for ban on market sale of live wild animals as an ’emergency public health measure’ against COVID-19.