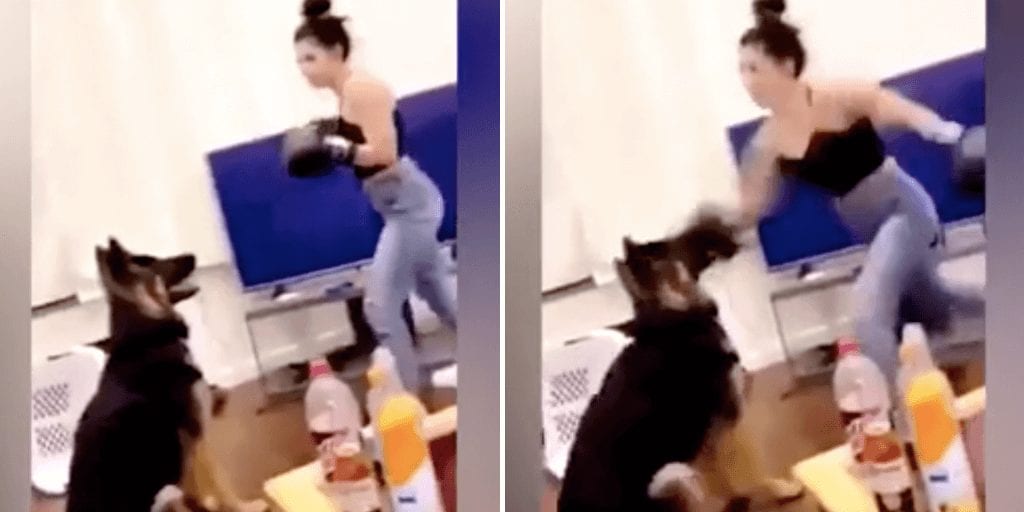 Social media users have reported an unidentified woman for animal cruelty after her video pummeling her dog goes viral.

A woman from Treasure Valley, Idaho, is likely to be arrested and penalized up to $5,000 after her snapchat video that has since gone viral shows her punching her German Shepherd.

In the short 13 second disturbing clip, the woman in workout clothes and boxing gloves is seen landing around 10 blows on her dog’s head.

As she punches the dog, who yelps in pain, a man in the background quips: “We’re boxing animals. Where’s Sarah McLachlan?”

The man is seemingly mocking the Canadian singer-songwriter and well-known animal rights activist, who has featured in many end-animal-cruelty commercials.

After one hard particular hard jibe, she says: “I hit him so hard I felt that through…”

WARNING: The video may be distressing to some viewers

The video has sparked a huge outcry on social media with people demanding strict action against the woman.

The Idaho Humane Society has launched an official investigation after receiving an “overwhelming” number of calls and emails about the clip.

“We started an official investigation as a result of this video. This morning the individual was identified and we sent a Humane Officer to discuss the situation. The investigation is currently pending review at the local prosecutor’s office for a charging decision,” the society wrote on Facebook.

The woman could be booked by the Ada County Prosecutor’s Office under a local law for “beating and harassing animals.”

The offence carries a maximum sentence of up to six months in prison and up to $5,000 in fines, as per the Idaho Statesman,

Too Fab reported that the woman defended her actions and clarified she was only playing with her pet and it didn’t get hurt to a social media follower who claimed to know her.

According to a screenshot of the conversation, the woman stated: “He plays hard. A girl gunna hit him a little bit and you guys wanna press some girl hitting him with gloves.

“Never got hurt and was playing the entire time. I’d never let my dog get hurt.”

“I do what I do with my dog. He thinks it’s a game was he hurt at all in the video or at all?” she continued.

“He’s literally laying with me in bed.”

Share this story to reveal the horrific abuse some owners inflict on their pets.