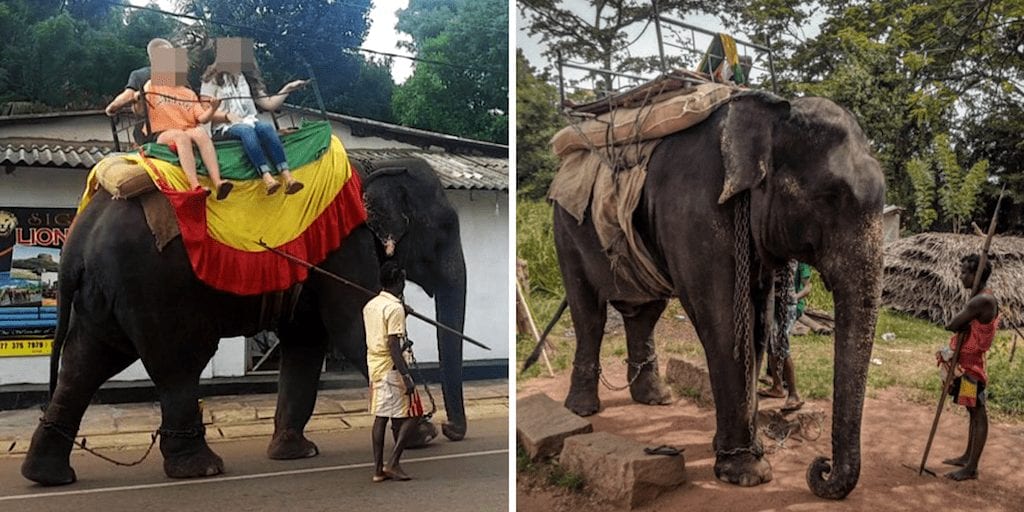 A young elephant has tragically died after being forced to work gruelling shifts carrying tourists in Sri Lanka.

The teenage elephant named Kanakota died from exhaustion in the popular tourist destination of Sigiriya.

Furious activists said the elephant was forced to give back-to-back rides to tourists in the blistering Sri Lankan heat, and he eventually collapsed and could no longer take the abuse.

Pictures reveal Kanakota had his legs shackled to enable owners to keep control of her, and he was made to carry a heavy, uncomfortable seat on his back for tourists to sit on.

The owners used a sharp, painful bullhook to force him to carry out his duties and bring in money at the expense of Kanakota’s health.

A picture of Kanakota after he gave his final ride was released by activists, who said deaths such as these are entirely preventable.

Kanakota was just 18 years old – elephants live up to 60 years old in the wild – and had been used in the animal tourism trade for four years taking in $30 per ride.

Locals said he was made to work an exhausting parade one night, and then the next day forced to make four gruelling trips in a row without any rest.

But the fourth ride proved to be one too many, and Kanakota collapsed from the heat and exhaustion. There has been no official cause of death announced, but locals and activists say the elephant clearly died from exhaustion.

‘This young elephant’s tragic and cruel death was entirely preventable,’ he said.

‘Until tourists refuse to ride elephants, more of these gentle giants will continue to suffer and collapse from exhaustion. ‘Sri Lankan activists and animal lovers have been campaigning tirelessly to enact this animal welfare bill that will finally change the laws and offer animals the protection they so desperately need. ‘We urge tourists to never ride an elephant, and call on the Sri Lankan government to instate a new Animal Welfare Bill that will finally offer protection to the country’s amazing array of animals and wildlife.’