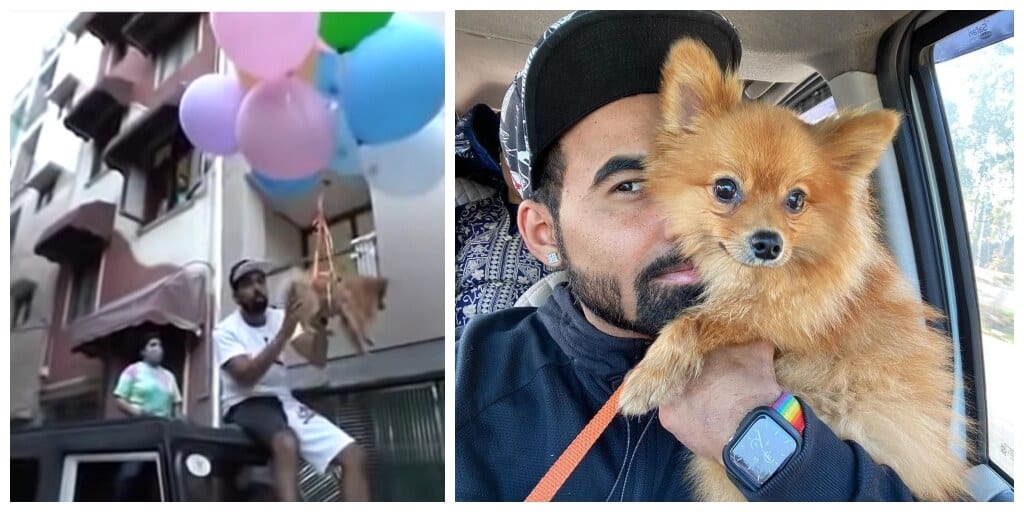 A 32-year-old content creator posts a video that shows his dog strapped to a bundle of helium balloons and left afloat in the air – gets arrested following netizens outrage.

Last week, a Delhi-based YouTuber was detained under animal cruelty laws after posting a video, which showed him trying to make his dog fly by tying the helpless animal to helium balloons.

Gaurav Sharma, known as Gauravzone on YouTube, has more than 4.15 million subscribers. His channel is all about exploring the capital city of India, New Delhi.

The controversial video, which has now been deleted following severe backlash, showed Sharma’s dog- Dollar- tied to more than 10 balloons around the waist.

In the first half, Dollar was suspended in the air before Sharma’s mother got hold of him.

In the next part of the video, Sharma is seen sitting atop a car, where he once again attempts to make his pet fly by releasing Dollar with the helium balloons attached to his back. The dog floats up to the second floor of the building before the video ends.

Tied a dog with helium balloons that flew to the third floor of a building what a shameful activity has done by this so called youtuber gauravzone aka Mr. Gaurav Sharma for fame, this incident could lead to death of his dog. #dogs .@PetaIndia #PETA pic.twitter.com/TLzYu244Vr

Sharma’s antics led People for Animals, an animal protection organization, to lodge a police complaint against him and get him arrested.

The YouTube content creator was charged with animal cruelty under sections of the 2005 Disaster Management Act and the 1960 Prevention of Cruelty to Animals Act.

“When we first saw the video, the first thing we did was that we downloaded it and saved it because we knew he would delete it and that is exactly what happened,” Gaurav Gupta, a spokesperson for the animal welfare group told ThePrint.

“We lodged a complaint against him at the police station there and… got to know that he has been arrested.”

Sharma, who was later released on bail posted an apology video stating he had taken all safety precautions while shooting the dog-flying video.

He also added that he is an animal lover and he treats his dog as his own child. He further urged his followers to not get influenced by his video and

‘An apology is not enough’

However, animal lovers panned Sharma for his cruel and brazen act after the video went viral on social media.

“Why don’t they do these experiments on themselves.Why to risk poor animals life. Pathetic, cheap and highly unethical act,” one social media user commented.

“Just shows the mentality of a man and what he is capable of doing for entertainment if given too much power,” a third added.

Gupta added: “An apology is not enough. It is like saying you killed someone but you apologised so it’s alright. The dog could have had a heart attack, he could have died if the balloons burst.

“Besides, this is not the first time that he has made such videos. We have evidence of a few other videos also in which he can be seen showing cruelty towards animals.

“He has deleted these videos now but we have those videos shared. For instance, in one he ties the legs of a pigeon and places it in a swimming pool and then sets his dog on the pigeon. He has shown excessive cruelty towards animals and we will lodge complaints against him in these matters too slowly.”