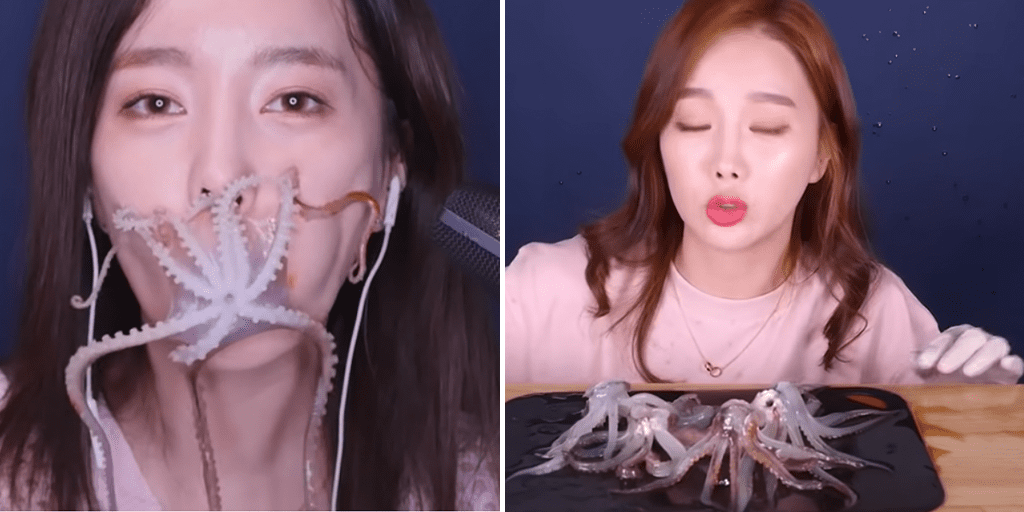 Korean YouTuber Ssoyoung has been blasted for making gruesome videos that show her torturing and eating live animals in a cruel and inhumane way.

Ssoyoung has over a staggering 3.4 million subscribers on her YouTube channel, where she publishes ‘ASMR mukbang’ videos that aim to evoke sensory and visual responses in viewers watching her binge-eat or consume uncommon delicacies.

In her videos she glorifies animal cruelty and suffering as she derives pleasure in decapitating them mercilessly while at times, she simply chews the animals’ heads off.

For instance, her vile ‘Dancing squid’ video that got her 24million views shows her hacking live squids and devouring the heads after drenching them in soy sauce.

In another octopus video, while she is cooking one in a pot, she douses another one lying on the board with sauce, sprinkles some sesame seeds before shoving the live creature in her mouth.

Ssoyoung has been making her mukbang ASMR videos for about a year and although she is also not the only YouTuber to have eaten live creatures on camera, her sadistic pleasure is morbid, disturbing and quite frankly ‘gone way too far’ as fellow YouTuber Ethan Klein has highlighted in his recent video.

“She clearly loves torturing animals. Is cruelty a central theme of her content? This video, I believe, proves yes, ” said Klein in his video-ASMR has gone way too far.

“I think she knows that if she wasn’t acting at least a little squeamish and nervous about it, then she would be seen as a total sociopath,” added Klein’s wife Hila.

“She clearly loves torturing animals. No question about it.”

Many other Youtubers including Penguinz0, Tyler Rugge and Someordinarygamers have slammed Ssoyoung’s graphic, repulsive and barbaric videos.

Penguinz0 released a video titled Youtuber Tortures and Eats Animals Alive in which he states that Ssoyoung “takes it to the next level but making it something diabolical.”

He condemns the youtuber for killing sea creatures in a slow and inhumane manner for fun and entertainment before eating them.

He adds that the creatures she chooses to eat are well documented to have awareness and intelligence. He states: “Octopus are among the most intelligent creatures we have on the planet. They are up there with dolphins. They have a fully complex nervous system, brain, have as many neurons as dogs do and process pain and information in much the same way a dog does.”

While many have called on YouTube to take her videos down, especially when animal cruelty footage is banned under its terms of service, the online video sharing platform clarified her videos were compliant.

A YouTube spokesperson told Business Insider: “Our trust and safety team is located around the globe and we draw upon this regional expertise when drafting our policies. We have strict policies regarding animal abuse, and have determined the videos highlighted do not violate them.”

However, a user named Paolo Wang has launched an online “Ban Ssoyoung from YouTube” petition on Change.org petition which has already received 22,949 signatures.

“This is clearly animal abuse, and you don’t have to be a vegan to see that,” reads a part of the petition.

Share this story to raise awareness for animal exploitation.