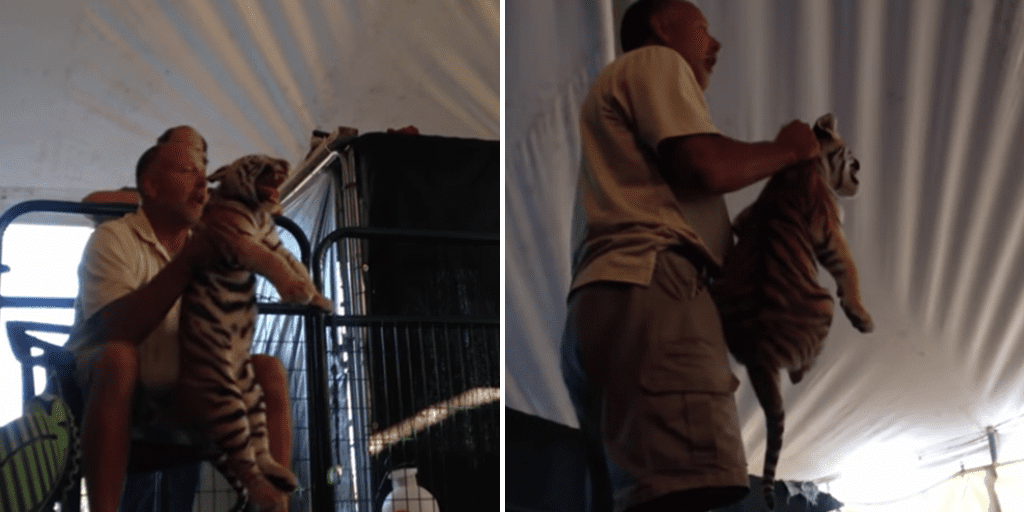 Image: PETA (People for the Ethical Treatment of Animals) / YouTube

A roadside zoo owner has had his permit revoked after inspectors revealed horrific cases of animal abuse at a court case, including animals being beaten to death.

According to the U.S. Department of Agriculture’s reports, Timothy Stark is guilty of animal abuse at his organisation Wildlife in Need in Southern Indiana.

Official documents paint a grim picture of the treatment of many wild animals at the roadside zoo.

A judge has ruled that Stark violated the Animal Welfare Act more than 120 times. The 183-page document lists a string of horrific incidents – including beating animals to death, shooting them with a shotgun and not providing adequate medical care.

The zoo’s license was revoked and the business fined $300,000, while Stark was charged $40,000 but avoided a prison sentence.

Stark was charged with failing to look after animals who were sick and dying, and a confirmed accusation found that he beat a leopard cub to death with a baseball bat, according to reports in USA Today.

The charges come after a four-year inspection by the Animal and Plant Inspection Service.

Stark has 35 days to appeal the decision, and according to WDRB he plans to do so.

The documents for the extensive trial describe Stark as having little in the way of official accreditations as a zookeeper.

The USDA also accused Stark of verbally abusing and threatening its staff during inspections. He is also accused of falsifying documents claiming he had a qualified veterinarian at the site.

Documents reveal that Stark ‘euthanized’ a leopard cub by hitting it with a baseball bat before it had been seen by a vet.

One statement given by a vet to the courts explained that Stark also used a shotgun to kill animals, but that a baseball bat was his preferred method.

Documents give a shocking list of animals who suffered at the hands of Stark’s organisation, including:

The report also revealed that humans were regularly injured in ‘playtime’ with animals such as baby tigers. In one case a girl had to go to hospital to have her arm cleaned and bandaged after being bitten.

Sufficient records were also not kept for the animals – in one visit inspectors found that 43 animals had no official records listed.

“The USDA has effectively cut Stark off at the knees, preventing him from continuing to torment and exploit vulnerable lemurs, sloths, dogs, and other animals for a quick buck,” PETA said in a statement.

“PETA looks forward to seeing this terrible place shut down and the animals moved to reputable facilities where they’ll never again be used as photo props.”