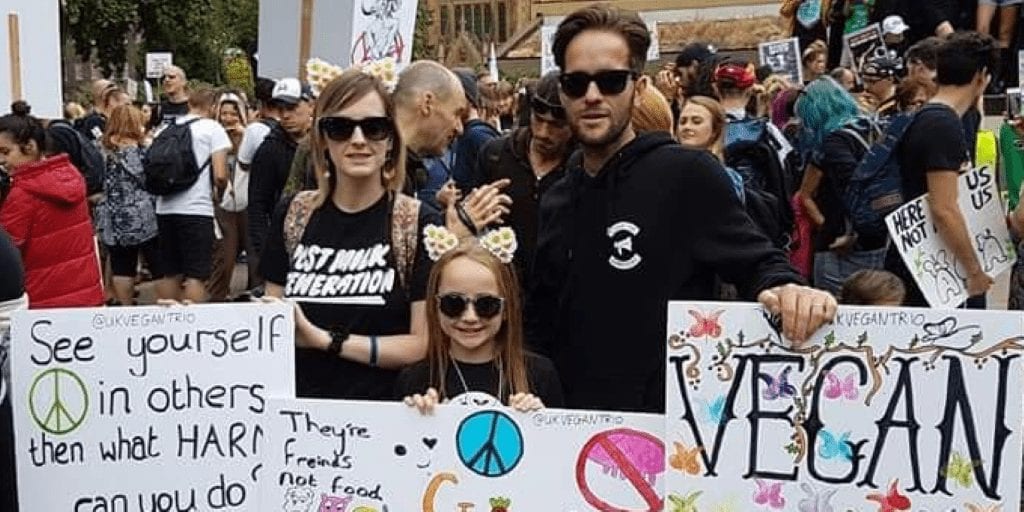 Vegan parenting can be a challenging business. There’s no hard and fast rule which can be applied to every household, and there are many different parenting approaches.

Bringing up children as a vegan can throw up a lot of dilemmas: Should you strictly enforce a plant-based household, or allow freedom of choice? At what age do you explain the reasons for your veganism? How do you deal with schools or parents who fail to provide sufficient meals?

Totally Vegan Buzz caught up with ten vegans to hear about their approach to plant-based parenting – all of which were unique, but with a consistent theme of respect and compassion.

Jessie explained that her son recently asked for some eggs. She told him he could eat them if he wanted, but explained where eggs come from, and how the chickens are treated.

“I then asked him if he would still like them and he declined, so he’s making an informed decision,” she explained.

“I feel it’s really important he knows why we live this way and can choose it for himself, not just do it because I am.”

One of Jessie’s biggest concerns is how her son will feel about people who choose to eat animal products.

She continued: “Manners and politeness are important to me so I don’t want my son to be rude to anyone or forceful of the fact that we are vegan. But it’s so hard to explain why other people still live this way and contribute to animal abuse, poor health and environmental issues.

Lea Watson, from Vincentia, New South Wales, has ‘eight compassionate vegan kids who are a big voice for the animals’.

“I taught my kids that it isn’t their ‘choice’, it is the animals’ choice that got taken away from them, and they didn’t want to die to be eaten. We have to respect that,” she said.

“They are healthier than all their friends and have never been to the doctors in all their lives and my eldest is 22.”

Jodie Monroe-Evans, from Thanet, Kent, has been vegan with her 10-year-old daughter, Sophie, for 15 months, and was open and honest about the reasons.

She used to eat dairy at her grandparents’ house, but doesn’t anymore.

“Since taking her to bear witness at a local calf export, she went vegan on the spot and is now vocal to her grandparents about the reasons why,” she explained.

Jodie plans to take a nutrition course to arm herself against any probing questions about her daughter’s lifestyle.

“They want to be like their friends. I spoke to the teacher and have sent in a box of vegan treats for when there are birthdays,” she explained.

“I bake when there’s any event on, and at after school club I send our own butter. For the school Christmas dinner I’m literally buying what I want her to eat and sending it in – as close as I can to what the other children are having.”

Jacobs is separated from her daughter’s father, who is not vegan.

“Again I have to send lots of food with her,” she said.

“At home we eat completely vegan, but at breakfast club she’ll have the odd non-vegan thing, and at her dad’s she’s eating mostly vegetarian.”

“Around the age of ten they both started eating a bit of meat at other people’s houses and when they were out and about,” she said.

They are now 13 and 15, and her older son loves meat, fish and chicken, but she predicted her younger son will go back to a veggie lifestyle before too long.

She explained: “They happily eat the vegan and veggie food I cook and respect my decision, and use lots of non-dairy milk and soya yogurts as they’re in the fridge anyway.

“We all respect each other’s choices, and I just modify the meals – normal cheese on top of half the pasta bake, vegan cheese on half – and it’s not a big deal.

“My older one loves Linda McCartney pies and veggie curries, which happen to be vegan but I don’t necessarily mention it, it’s just food!”

Stacey Crossan, from Southampton, Hampshire, doesn’t keep any animal products in her home, and her toddler is vegan.

But her 13-year-old eats what she wants at the houses of friends and other family members.

“It’s really hard with my teenager, and I wish I knew then what I know now, so we could start being vegan from the beginning,” she said.

Stacey also blames wider society for the lack of information provided to children.

“Schools don’t have vegan options, or they don’t have enough. Schools still teach old school cookery and that a Standard American Diet is the correct way to eat.”

“Not once, when my teenager had to bring ingredients into school, was the meal healthy and balanced. School is important in teaching healthy living and they just don’t do it.

“I want my child to have a healthy life and being vegan is the only way,” she added.

Cassie Welch from Andover, Hampshire, has a three-year-old son, who is vegan at home and veggie at pre-school.

“I’ve told him that meat is animals – ‘sausage and ham is a piggie, and we love piggies don’t we? We don’t want to eat them!’”

Welch hopes her son will choose veganism in future.

“I encourage him to choose vegan where possible, but things like birthday parties are hard. And I can’t deprive him of cake,” she added.

Jasmine Hunt turned vegan eight months ago, and is raising her two-year-old as a vegetarian.

She’s very open with her son about the reasons behind their diet.

She said: “I think it’s much easier to explain veganism and vegetarianism to children as they love logic and common sense, and not eating  animals is logical for many reasons!”

If she had gone vegan before her son was born, Jasmine would have raised him on a plant-based diet.

“I’m going to inform him why I don’t eat dairy when he’s old enough and not hide any of the facts then he can chose if he wants to give that up too,” she explained.

“I think it’s important to gauge their ability to understand the consequences of eating an animal, which is easier to explain than the dairy industry, which isn’t straight forward.”

And she hopes he will approach her with questions.

“I’m sure he will naturally start to be curious about why he doesn’t eat meat and others do.

“I think when he is around 3 or 4 he might start asking questions about why I don’t eat certain foods he does. I will simply be honest with him, without showing him anything graphic at a young age as I personally feel it would be too much to expect of a young child.

“It doesn’t need to be complicated, just that we like animals and want to help them, just like we want to help protect the planet.”

Marie Lyons, from Leeds, West Yorkshire, is letting her kids decide the diet they follow.

“If they ask questions, I’ll give them the truth,” she said

“But I’m not letting them believe rubbish – things like, ‘hens just lay eggs, it’s not cruel, and that milk is for humans’.”

Marie has a seven-year-old-son and a 15-year-old daughter.

“I have told my son that boy chickens are killed because they can’t lay an egg, and that milk is for the purpose of growing a baby calf into a half ton cow – just like I fed my kids my milk when they were babies,” she added.

“He’s not really given any response, but I won’t have them believe nonsense.”

Emma Addison has been vegan for a couple of months, and has an omnivore husband.

“I haven’t made my children go vegan too because they’ve been used to meat and dairy, and they should make the choice to not eat it themselves.”

Addison cooks vegan meals with the option of her kids adding meat if they want to.

“It’s really hard, but just because I’ve changed I can’t force them all to, as much as I’d really want them to.

“If I were to have my children now after turning vegan, I’d rather raise them as vegan,” she added.

What methods do you use as a vegan parent? Tell us in the comments section below!