Opinion: If You’re Offended By Anti-Dairy Farming Campaigns, You Should Go Vegan 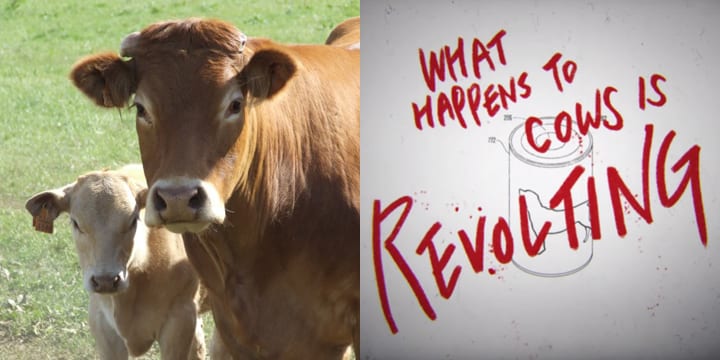 Do you know what is far more offensive than a graphic video of a cow being sexually assaulted during artificial insemination? Actually being the victim of sexual assault, which is of course what cows are subjected to for the production of most of the world’s dairy products.

That’s what makes the reaction to PETA’s  (People For The Ethical Treatment Of Animals)  new video The Pregnancy Gun so laughable. The cartoon graphic (that’s right, a cartoon!) was deemed so abhorrent that it only lasted two weeks in 21 Wisconsin’s stores – the state dubbed ‘America’s Dairyland’ due to its exceptionally high production of cheese – before it was pulled.

As a vegan, watching the video is upsetting for sure. But that’s only due to an awareness that the horrors of dairy farming happen on a such a huge scale every single day.

For a vegan, feeling uncomfortable watching the video is well worth the end goal of raising awareness of such brutal practices, and hopefully convincing people to change their habits.

The only real difference in how emotive The Pregnancy Gun is for vegans and non-vegans is the potential for the latter to feel guilt about their consumption of dairy.

“PETA encourages anyone left with a bad taste in his or her mouth by this video to ditch dairy ‘products’ in favor of soy, almond, coconut, or oat milks; creamy vegan cheeses; and other non-dairy foods.”

What do you think about the campaign? Leave your thoughts in the comments section below!