Do vegans eat honey? Everything a vegan needs to know about honey – Totally Vegan Buzz
Skip to content

Do vegans eat honey? Everything a vegan needs to know about honey 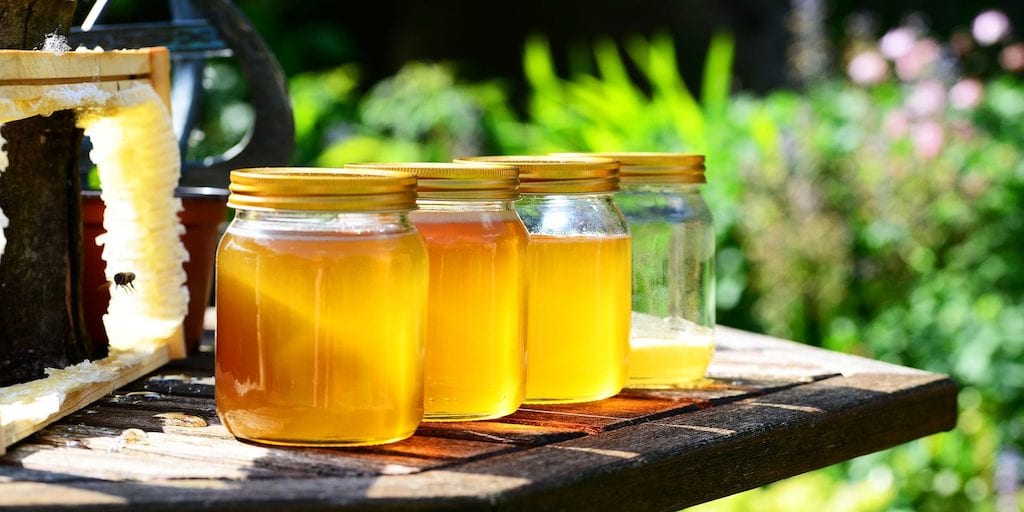 Veganism is all about preventing harm to animals, but there’s one food not all vegans agree on: Is it OK to eat honey?

Honey is a sweet viscous food produced by bees. Honey bees extract nectar from flowers and regurgitate it when they reach their hive. This is processed by enzymatic activity and water evaporation, and stored in honeycombs by bees.

Bees are insects and therefore classified as animals. As vegans by definition do not consume animal products, many feel a true vegan would not consume honey as it is derived from an animal.  However, some argue against this conclusion for a variety of reasons.

How is honey made?

The process of making honey by honey bees is complex. A single honey bee will produce approximately 1/12 teaspoon of honey in her lifetime. Honey bees fly from flower to flower to extract nectar using their long, tube-shaped tongue.

This nectar is stored in the honeybee’s crop. Bees have two stomachs and the crop, or honey stomach, is where nectar is stored. When the bees fly from flowers to their hive, the crop secretes enzymes which make the nectar more suitable for long term storage.

On arrival at the hive, the forager bees will regurgitate the contents of the crop and pass it to the house bee. The house bee adds more enzymes and processes the nectar, before depositing it in the beeswax cells.

The water content is reduced further by fanning by bees’ wings for dehumidification. This produces honey, and the bees seal the cell with a plug of wax upon completion of the process.

How is honey harvested?

Honey is collected either from wild bee colonies or domesticated beehives. During the process, the bees may first be pacified by smoke. The honeycomb is removed from the hive to extract honey using a honey extractor, or the process of crushing.

As a further step, honey is filtered to remove beeswax and other dreck. The filtered honey does not need any preservatives as its chemical composition is suitable for long-term storage.

Often, additional ingredients such as sugar and syrups. are added to change the flavour, viscosity or to make it cheaper to produce.

Why vegans would not eat honey?

Some arguments against vegans consuming honey relate to inhumane beekeeping practices used for profit enhancement, including:

But do all vegans avoid honey?

Some argue there are many other things for a vegan to worry about if honey is to be considered. Leading vegan nutrition specialist and author, Michael Greger, explains: “A certain number of bees are undeniably killed by honey production, but far more insects are killed, for example, in sugar production. And if we really cared about bugs we would never again eat anything either at home or in a restaurant that wasn’t strictly organically grown—after all, killing bugs is what pesticides do best.

“And organic production uses pesticides too (albeit “natural”). Researchers measure up to approximately 10,000 bugs per square foot of soil—that’s over 400 million per acre, 250 trillion per square mile. Even “veganically” grown produce involves the deaths of countless bugs in lost habitat, tilling, harvesting and transportation. We probably kill more bugs driving to the grocery store to get some honey-sweetened product than are killed in the product’s production.”

Greger argues that having too many conditions to veganism might turn off potential new vegans.

An additional argument to promote the consumption of honey supports ethical, organic and informed beekeepers. Ethical beekeeping involves keeping bees in a secure environment without any abuse or unethical treatment, whether or not profits are high.

Honey or no honey?

Honey is a sticky topic in the vegan world which not everyone agrees on.

For vegans who choose not to eat bee honey, many honey substitutes are available including maple syrup, agave nectar and date nectar.

As a vegan, do you think it’s OK to consume honey? Tell us in comments below!