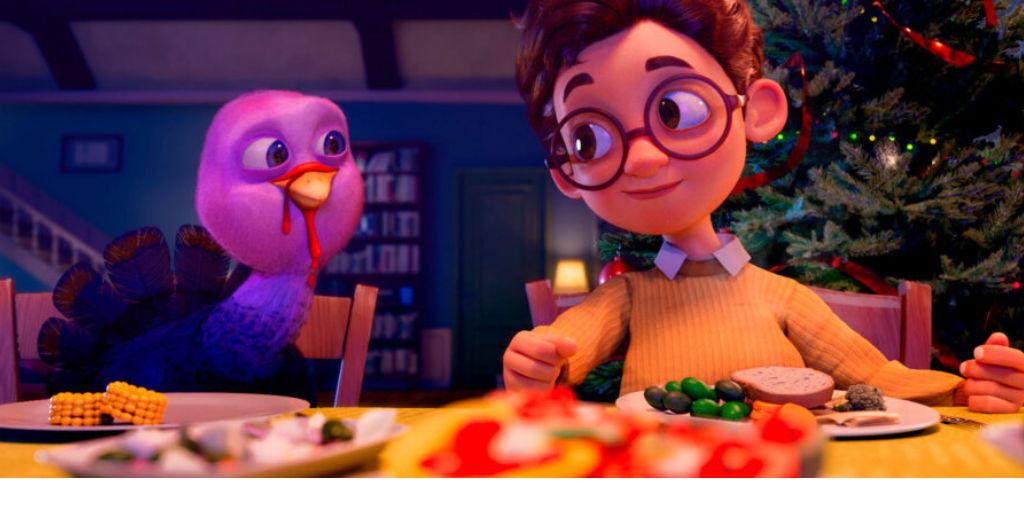 The animated commercial calls for a peaceful and vegan Christmas

Vegan charity PETA has created its first-ever Christmas advert to urge viewers to leave turkeys off their plate this festival.

It is shot from the point of view of a turkey and follows young Toby’s narrow escape from an abattoir-bound lorry into the loving home of a family.

The eye-opening and touching commercial is made in collaboration with creative agency Dream Farm.

The closing shot is sure to make you question the status quo as it shows the turkey seated – not served – at the Christmas table, as a cherished member of his new family.

It ends with the message: “Peace on Earth begins at home—have a vegan Christmas.”

The advert will air on cinema screens across the UK including  most Vue, Cineworld, and Odeon branches this festive season. However, since being rated 12A by the film classification board, it will not be shown ahead of any younger children’s films.

Turkeys in the food industry

Each year nearly 68 million of these naturally explorative and intelligent birds are killed for food in the US during the holiday season alone.  Slaughter figures reach a staggering 240 million throughout the year.

In the UK nearly 9-11 million turkeys are killed each year just for dinner on the big day.

According to animal welfare organization FOUR PAWS, turkeys are inherently social. They are highly intelligent, playful, inquisitive, enjoy exploring and can even recognize one another by their voices.

However, turkeys raised for food are housed in poorly ventilated industrial sheds in extraordinarily cramped and confined conditions. Workers often cut off the tips of beaks and toes of poults (baby turkeys) to prevent them from harming one another due to the stress they endure on these farms.

Also, since these birds enjoy no federal legal protection, they are routinely subjected to cruelty and neglect in the food industry. Turkeys are genetically bred to grow as quickly as possible, and their lives are cut short at just 12-16 weeks.

Similar to ‘franken-chickens’, these oversized turkeys often become crippled under their own weight, are more susceptible to disease, with a higher risk of cardiac problems and muscular dystrophy.

Moreover, injured or sick birds that don’t make the cut are considered “leftovers” and discarded mercilessly into grinders alive, left shackled upside down and dragged through electric baths, or simply abandoned to bleed to death.

In a statement, PETA said: “While humanity touts peace and compassion in the spirit of Christmas, misguided holiday customs spell torment and a brutal death for turkeys and other animals.

“Killing animals is at odds with the festive message of love, hope, and joy. Peace starts on your plate. The easy choice to skip eating animals spares them unfathomable suffering, and you can still have all the classic Christmas foods you love – just without the cruelty.”

PETA vice president Mimi Bekhechi added: “Turkeys like Toby are gentle, gracious, and gregarious individuals, and each one has a story that should not end on a fork.

“PETA urges everyone to share comfort and joy this Christmas by enjoying a delicious vegan feast.”