What Is Kombucha? Everything You Need To Know About Kombucha - Totally Vegan Buzz
Skip to content

What is Kombucha? Everything you need to know about Kombucha 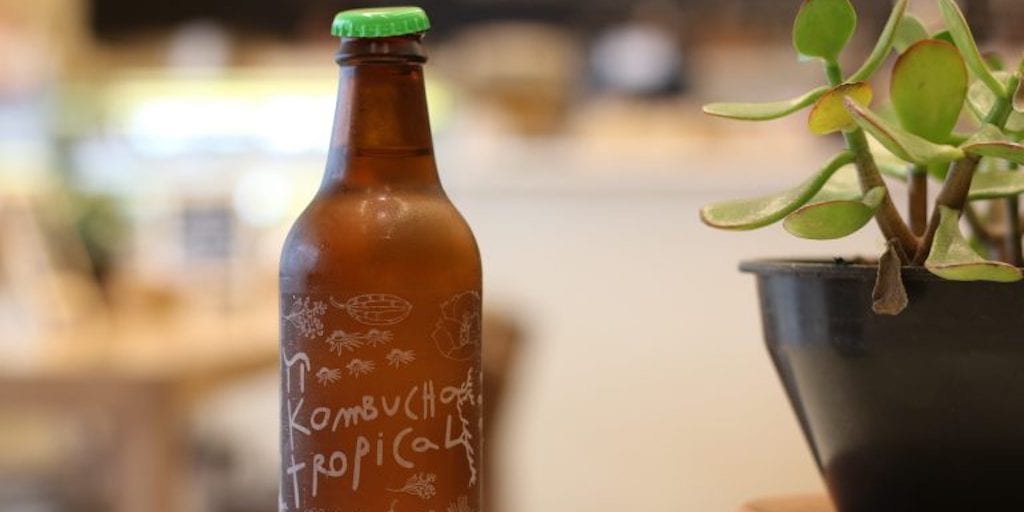 Kombucha has been making waves as a vegan health drink. But what does it taste like? What’s in it? Is it really good for you? And what is SCOBY? Totally Vegan Buzz provides the ultimate guide to Kombucha.

An introduction to kombucha

Kombucha is a fizzy, slightly alcoholic drink made from fermented tea, sugar and yeast. It is popular partly due to its claimed health benefits.

Kombucha is fermented using a symbiotic culture of bacteria and yeast (SCOBY), known as mother or mushroom due to its ability to form a mushroom-like structure during the fermentation process.

SCOBY releases probiotic bacteria during the fermentation process by breaking down the sugar in tea. This is the reason kombucha becomes carbonated, or fizzy.

The origins of kombucha

There is no consensus about the origins of kombucha, but Manchuria seems to be the most likely location, somewhere between 200-2000 years ago.

Kombucha was reported to have been consumed at least as early as 1900 in east Russia, but the drink’s popularity boomed in the early 21st century.

Since kombucha has a slight alcoholic content, it is sold as a beer alternative in restaurants and pubs.

Digging into the name

Kombucha (also known as tea mushroom, tea fungus and Manchurian mushroom) has about 80 names worldwide such as hongo, cajnij, combucha and haipao.

The word konbu-cha or kobu-cha in Japanese refers to a different drink called kelp-tea (infused kelp in hot water). The word for fermented tea in Japanese is kocha kinoko.

Kombucha can be made at home by first adding tea and sugar to boiling water in a jar. SCOBY is then added to this mixture, once it cools.

The jar is then covered and left for about a week to ferment. To increase carbonation, the mixture is left for a few more days with some added sugar.

Some people add spices and fruits at this stage for flavouring. During the process of preparation, contact of kombucha with any metal should be avoided, as this weakens the SCOBY and hampers the flavour.

Making kombucha requires careful preparation techniques and appropriate hygiene. The process involves letting the bacteria grow. Though most of the bacteria are probiotics, if not appropriately prepared the drink may grow harmful bacteria or mold.

What is the blob suspended within kombucha?

If you make your own kombucha, you may notice a blob floating in the liquid. This is a byproduct of the fermentation process, which can be strained out of the drink through a sieve.

Yes. As kombucha is made through a fermentation process, a trace amount of alcohol is created. When the sugar is fermented, it breaks down to alcohol and carbon dioxide.

Some commercial kombucha teas are labeled as non-alcoholic, because the content of alcohol is less than 0.5%, which is the permissible limit as per US Alcohol and Tobacco Tax Trade Bureau. However, homemade kombucha may have a higher percentage of alcohol.

Yes. No animals or animal-products are used in the making of kombucha. Referred to as ‘immortal health elixir’ by some makers, kombucha is simply fermented sweetened tea with culture of bacteria and yeast.

Kombucha is a slightly effervescent, slightly sweet, slightly sour fermented tea. It can even taste fruity or spicy depending on additional ingredients.

Kombucha has many purported health benefits, such as:

Kombucha is generally accepted as a healthy drink in moderation. However, for those sensitive to alcohol, caffeine or sugar, and people with a weak immune system or diabetes, kombucha may not the drink for you.

Since kombucha is unpasteurized, it may not be appropriate for pregnant and breastfeeding women. There have also been some rare cases of severe allergic reactions reported due to potentially contaminated kombucha consumption.

What do you think of kombucha? Let us know in comments below!