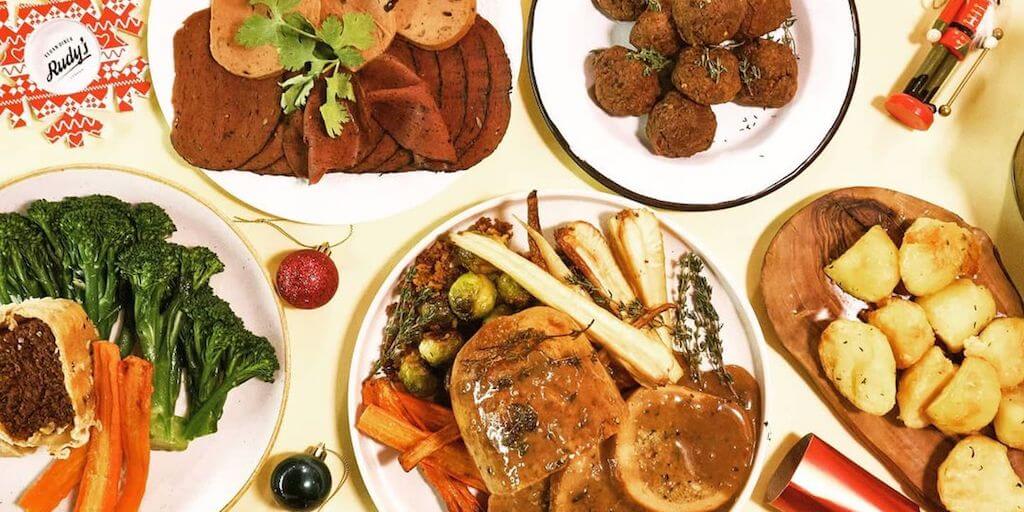 The vegan Christmas feast box contains all the classic Christmas dishes including a turkey, meatloaf en-croute, ham, pastrami and more.

It created the box so that vegans can enjoy all the classic Christmas dishes without the meat.

The first batch of the festive feast boxes went on sale on the 22nd November, and sold out within an hour. New batches will now be available to buy every Sunday with the sale starting at 2 pm.

According to the vegan butcher the meal packed in the box “would stuff Santa himself”.

The festive box priced £55  has some delicious treats inclduing a Christmas turk’y roll filled with cranberry & hazelnuts. The succulent seitan Turk’y packed with soysage stuffing accompanied by a generous serving of Turk’y gravy with fresh rosemary, thyme and garlic will be a sure showstopper on the dinner table.

The box is also full of all the traditional trimmings for the ultimate Christmas dinner including King Edward potatoes, parsnips, carrots, Brussel sprouts with baycon bits, all perfectly seasoned and ready to roast.

Rudy’s has also thrown in some festive extras such as pastrami, seasonally spiced Christmas ham, meat-free meatballs, and a meatloaf, wrapped in crisp, flaky pastry.

Popped water lily seed snacks are also added for you to munch while your dinner is heating in the oven.

The seeds come in three flavours; dark chocolate and raspberry, paprika and Provençal herbs, or the Cheezy vegan – nutritional yeast and black pepper.

On its opening day, the vegan butcher sold out of products within an hour, with queues around the block, and more than 100 online orders in the day.

Share this story to let others know of Rudy’s Christmas Meat Feast Box.