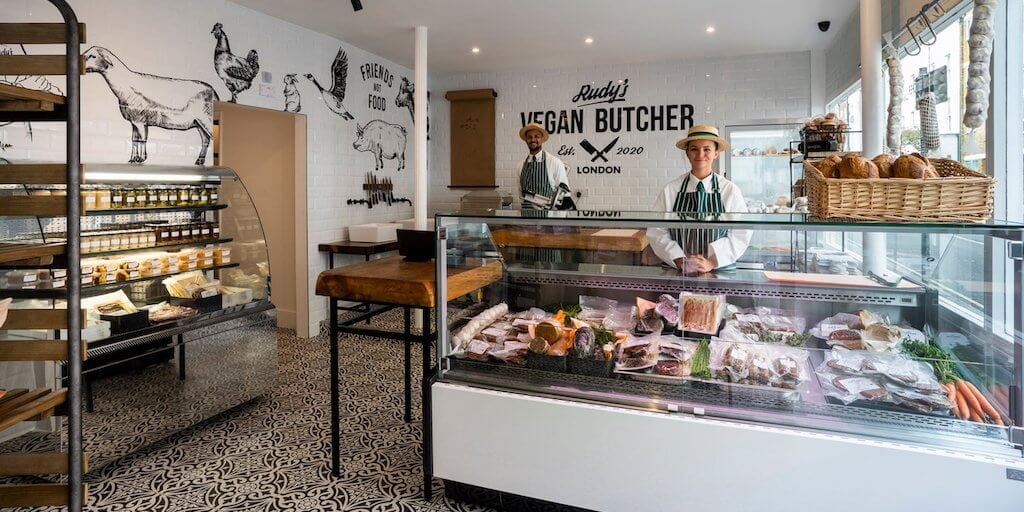 “People understand what it is that we’re selling. It’s all designed to emulate meat. It tastes like meat, it’s got meat-like texture.”

London based Rudy’s Vegan Butcher, which opened its doors on 1st November ( World Vegan Day), completely sold out on its first day, with 100 online orders in ten minutes.

The UK’s first vegan butcher shop had a long queue of eager customers waiting to place their order as well as become among those first 200 customers to get half a pound of free baycon each.

Rudy’s posted an Instagram video of the turnout on launch day, with a caption that read: “This was the line at 10:54am before we even opened and it didn’t slow down for hours! 100 online orders in the first ten minutes!

“Thank you to everyone who stopped by, messaged with love, ordered online, and shouted out our news. It was an unbelievable turn out.

“We are so blessed to have your support and feel overwhelmed by all the love. THANK YOU, thank you a million times and more.”

In a follow up post, Rudy’s updated that “after such a mad rush”, they’d also sold out of stock online.

The shop added that it would be “back with updates when our dedicated, hardworking team of chefs has restocked.”

The team behind the new butchers also run Rudy’s Vegan Diner in Camden, which they started in 2017.

While they offer a range of goods including whole dinner DIY kits, the new butcher shop will also sell plant-based barbecue staples, as well as a full meat-free charcuterie selection, including the likes of smoked ham, salami de Provence, pepperoni, and pastrami.

Co-founder Matthew Foster told Reuters: “People understand what it is that we’re selling.

“It’s all designed to emulate meat. It tastes like meat, it’s got meat-like texture.”

The shop’s launch has been a roaring success, however, some meat eaters are apparently miffed at the new shop. Many have also been debating online over whether or not a butcher’s can be vegan.

Piers Morgan, an outrageous TV host, took to Twitter to ridicule the new venture. He wrote: “A vegan butcher’s shop… and people wonder why I’ve written a book about the world going nuts.”

While many echoed his sentiment, one user wrote: “The world going nuts is the reason for a shop like this. Plant food is the future otherwise we won’t have a future at all. Simple really.”

A vegan butcher's shop… and people wonder why I've written a book about the world going nuts. https://t.co/vyc96YqmeS

Share this story to let others know about the new vegan butcher shop in London.