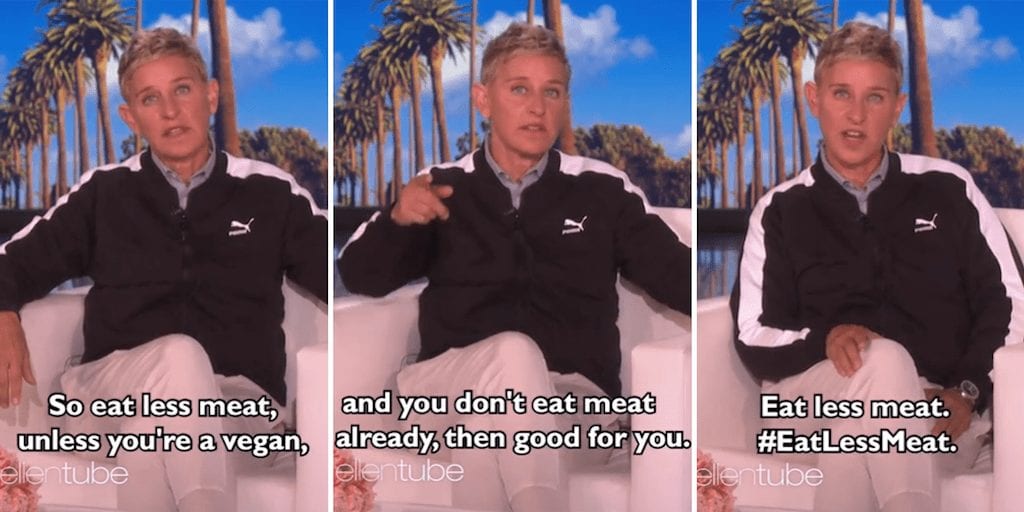 Ellen DeGeneres has urged her fans to ditch meat in a new video which says to viewers: ‘Hey, be neat, no meat’.

The popular Ellentube host turned vegan in 2008 after reading Skinny Bitch and watching the animal rights documentary Earthlings, but she’s since moved away from veganism after admitting she sometimes eats eggs and fish.

She said: “I was vegan for eight years and I really believe that it’s great for you.

“I was healthier than I’d ever been, I loved being vegan. But in the last year or two for no real reason, I started eating a piece of fish once in a while.

“Or I’ll eat eggs from chickens I know – if they are in someone’s backyard or are happy.”

But her dietary choices have not dampened her love for the vegan lifestyle and she uses her fanbase to champion the cause.

In a new video, she addressed her 77.2 million Instagram followers and Ellentube viewers, stating: “I was scrolling through the Gram, and I noticed that a lot of people were talking about eating less meat, which I think is a fantastic idea.

“So eat less meat, unless you’re a vegan and you don’t eat meat already, then good for you. So you don’t even need to pay attention to this.”

“Hey, be neat, no meat, #BeNeatEatLessMeat.”

She may have resumed eating fish and eggs on occasion, but she still voices her opinions against the atrocities inflicted upon animals in the meat industry.

Ellen once stated: “50 billion animals a year are killed and I think we all fool ourselves that there is some kind of happy cow and that it’s a quick death, that they just hit him in the head and that they are out.

How influential can Ellen be for animal rights considering her admission that she eats fish and eggs? Share your thoughts in the comments below!