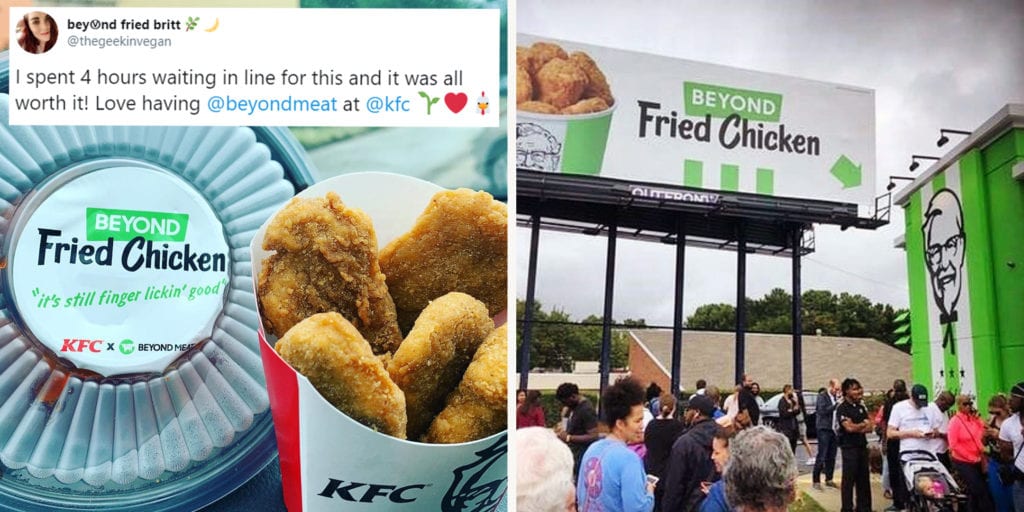 The verdict is out and by the looks of it KFC and Beyond Meat are clucking in delight.

KFC’s test drive to gauge customer response to their Vegan alternatives to fried chicken nuggets and boneless wings saw people swarming the Atlanta outlet from the moment the store opened.

The vegan options, which included Beyond Fried Chicken nuggets served with a choice of dipping sauce, and boneless wings tossed in one of three sauce options: Nashville Hot, Buffalo or Honey BBQ were all gone in five hours.

In just a few hours, KFC -Atlanta sold so much of its meatless ‘chicken’ that it equaled the amount of popcorn chicken it normally sells in a week.

Social media was abuzz with the action happening at the outlet. Reporters mentioned that fans lined up around the restaurant starting at 8 a.m. with double-looped drive through lanes and queues extending two city blocks.

Some customers said that they had waited up to two hours in line.

The Humane League-a nonprofit organization posted, “The lines are out the door, and the verdict is that the vegan fried chicken is worth the hype.”

Instagrammer Trahvae Freraire said, “The people are here in droves. I said droves!”

Nutritionist Whitney Miner  said, “These taste more like fried chicken than any of the other options that I’ve tried so I really hope that they make these available nationwide and very soon.”

Others social media reports stated that the Beyond Fried Chicken was tasty and hoped that it would end up in wider release soon.

KFC will now evaluate today’s results along with fan feedback to strategize the next step and the best way forward, which could be a larger test and/or national rollout.

Some people on social media are even speculating whether KFC had already decided to keep the vegan chicken.

Are you surprised KFC’s plant based chicken sold out so fast? Let us know in the comments below.