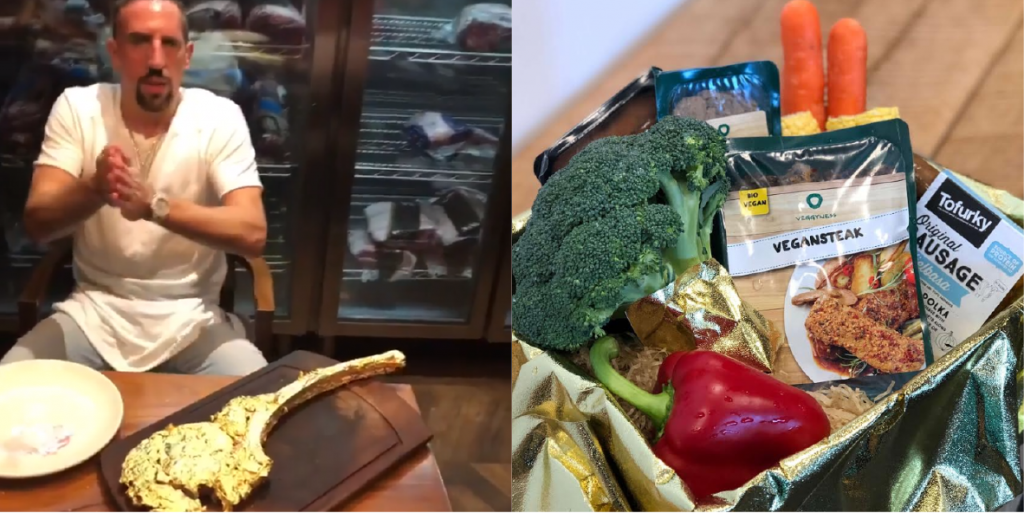 Footballer Franck Ribéry has been slammed by animal rights activists after he bragged about buying a £1,000 gold-covered slab of meat.

The French footballer caused outrage by posting a video on Instagram of himself rubbing his hands together as a gold-covered steak was sliced up.

He wrote in his Instagram story following the post: “For 2019, let’s dot the I’s and cross the t’s… Let’s start with the jealous, the haters, those only born because a condom had a hole in: f*** your mothers, your grandmothers and even your family tree. I owe you nothing.

“My success is, above all, thanks to God, me and my loved ones who believed in me. For the others, you’re nothing but pebbles in my socks!”

Animal rights group PETA were one of the first to respond by sending the footballer a golden basket filled with vegan steak and other plant-based treats.

PETA France noted in an accompanying letter to Ribéry that no matter the price of the steak, the animal who was strung up before his or her throat was slit at the abattoir paid a far higher price.

PETA explained that vegan foods provide all the protein, complex carbohydrates, and other nutrients that athletes need to get stronger and faster, minus the saturated animal fat, cholesterol, and contaminants found in meat, eggs, and dairy products.

Eating plant-based foods has also been shown to improve blood and oxygen flow, helping to repair torn muscle fibres and tendons for faster recovery from training and injuries.

PETA said in a statement: “These are just some of the reasons why top athletes including David Haye, Lewis Hamilton, Fabian Delph and Héctor Bellerín are choosing to eat vegan – and we hope Ribéry will follow suit.”

Bayern Munich has issued the player with a ‘heavy fine’.

Director Hasan Salihamidzic said: “[Ribéry] has used words that we as FC Bayern Munich cannot accept and Franck can never use as a role model and as a player of Bayern.”

What do you think about the gold-plated steak? Tell us in the comments section below!