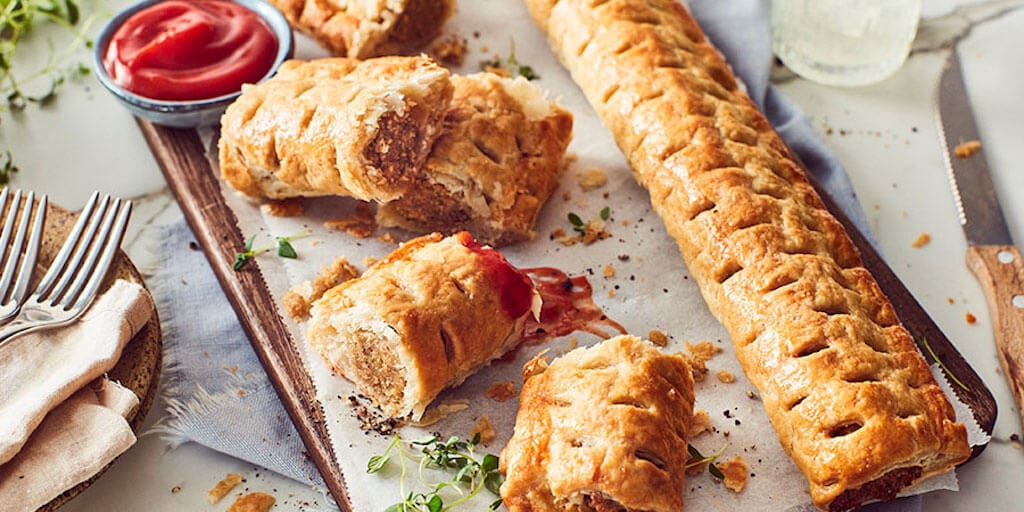 The supermarket chain’s No Meat range is considered the “world’s largest frozen vegan range,” and was recently acquired by vegan food and lifestyle company LIVEKINDLY Collective.

This week, Iceland launched a footlong vegan sausage roll described by the retailer as ‘an ideal snack for both vegans and flexitarians alike’.

The gigantic No Porkies sausage roll is 12 inches of seasoned vegan sausage meat wrapped in a “flaky, golden” puff pastry.

The newest item has been launched just in time for Veganuary and is part of Iceland’s No Meat brand, which also includes another new option called No Chick Southern Fried Strips.

While the sausage rolls cost £1.50 per pack of two, a pack of the vegan chicken strips retail for £3.00 per 450g. Both items are available in-store and online now.

Iceland, similar to other major retailers, has been steadily expanding its meat-free range in a bid to meet soaring demand.

No Meat products are currently available in Iceland, Asda, and Ocado in the UK.

From 1st January 2021, Iceland is also home to the exclusive freezer packs of Greggs’ vegan sausage rolls and steak bakes.

The collective on track to become one of the world’s largest plant-based food companies said the acquisition would help strengthen its position in the frozen sector of the fast-growing plant-based meat category.

Domenico Speciale, General Manager for LIVEKINDLY Collective in the UK said:  “No Meat has been such an incredible success with its award-winning, great value and great tasting products. This acquisition is a big step in delivering our mission of making plant-based food the new norm.”

Kees Kruythoff, CEO and Chairman of LIVEKINDLY Collective added: “Bringing No Meat into the LIVEKINDLY Collective family as a mission-aligned partner was a natural next step for us. Its strategy to meet the demand of consumers for healthier and more environmentally friendly vegan products mirrors our own commitment to protect the planet. It is aligned with our strategy to scale rapidly and transform the current global food system.”

Andrew Staniland, Trading Director – Frozen at Iceland Foods said: “We are absolutely delighted to be partnering with LIVEKINDLY Collective both to bring the No Meat brand to new consumers globally and to significantly expand Iceland Foods’ plant-based product offering in the UK.”

Share this story to let others know about Iceland’s new vegan options.