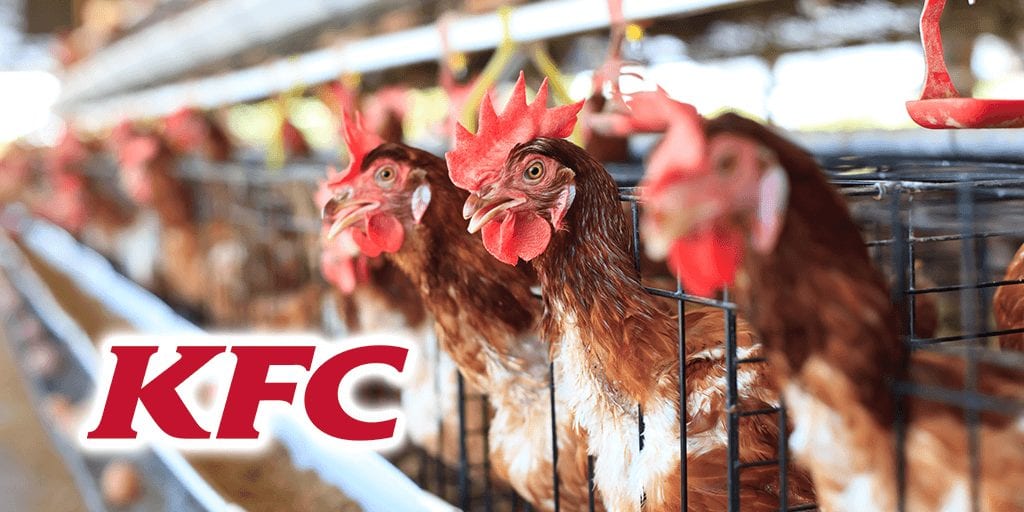 ‘They have a lot of progress to make, but we’re very happy that they’ve come out with this level of public data and transparency which they can now be held accountable on’

The report states that more than a third of the chickens in the fast food’s supply chain in the UK and Ireland suffer from footpad dermatitis (FPD) characterized by painful inflammation and lesions on the feet.

This condition is usually a result of poor living conditions driven by a number of factors linked to the chickens’ environment, feed and health. Birds in cages are known to continuously stand and walk on floors covered with urine and feces, which in severe cases prevent birds from walking normally.

KFC informed that the percentage of birds with (FPD) had dropped from more than half to 35% in just four years. It added that its top suppliers were achieving levels of 15% or less.

Apart from inflammation, one in 10 KFC chickens also suffer hock burn. This condition occurs when ammonia emanating from bird waste burns through the skin of the leg. It is typically associated with inactive birds.

The report added that nearly all the chickens reared in factory farms are typically fattened up and slaughtered within 30 days of them being born. This unnatural accelerated growth increases health and welfare problems for the birds, including inability to move and multiple organ failure.

KFC said to improve animal welfare standards, it has signed up to the NGO-led Better Chicken Commitment (BCC) and added that suppliers should switch to slower growing breeds and also reduce stocking density on its supplier farms.

“Meeting the criteria in the BCC is no easy feat, but KFC have put in place an active programme outlining the changes that need to be made to improve the brand’s supply chain, culminating in the publishing of the first report,” Paula MacKenzie, general manager of KFC UK and Ireland told The Guardian.

“This report sends a clear message to everyone – our suppliers, our teams and our stakeholders – on exactly what we are looking for in terms of welfare improvement. We know that what gets measured gets managed, and the figures in this report represent a solid benchmark against which we can track our future progress.”

Animal rights campaigners applauded KFC for its transparency but urged the fast food giant to do more.

“They have a lot of progress to make, but we’re very happy that they’ve come out with this level of public data and transparency which they can now be held accountable on,” said Lindsay Duncan, campaign manager for animal rights organization World Animal Protection.

Share this story to let others know about the poor conditions of chickens in factory farms.