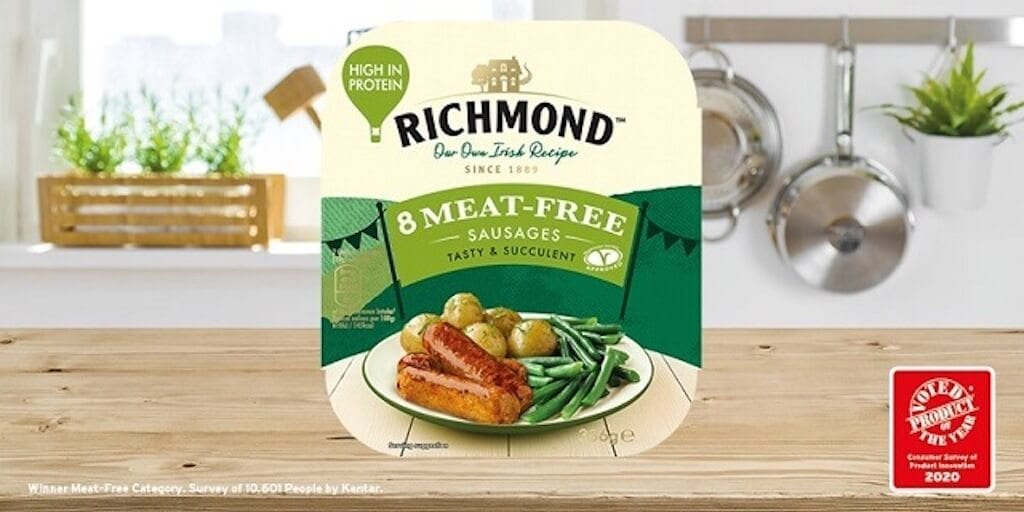 Meat Giant Richmond Foods has scooped the prestigious ‘Product of the Year award’ for its meat-free sausages.

Winners of this award commissioned by Product of the Year, are chosen by more than 10,000 consumers.

Product of the Year is said to be the UK’s biggest survey of product innovation and is considered as one of the industry’s most influential awards.

Trying your hardest to cut back on meat, but just really missing the classics? Well Richmond has answered your prayers and introduced their Meat-Free Sausages. Made from soya-based protein they look and taste just like a Richmond Pork Sausage, right down to the famous crispy skin. And at only 57.5 calories per sausage, they're guilt-free and perfect for #meatfreemonday

“With Richmond meat-free sausages taking top honours this year and with a particular focus on health and wellbeing, we predict increased levels of innovation in the sector with more plant-based products picking up awards in 2021.”

Slater’s predictions do align with changing market trends and consumer eating habits. A study her team conducted last month found that nearly half of the British population were considering eating plant-based products for their positive health benefits.

The team determined that “attitudes to vegetarianism and veganism have shifted colossally over the years” based on responses received when customers were asked to identify factors that would encourage them to try a plant-based product.

Results showed that 44% considered their health, whereas 31% cited cost and 25% looked at the environmental impact when opting for plant-based alternatives.

Going plant-based for a partner

While this research found 44% considering plant-based foods for their health, another poll studying factors that influence people to adopt a specific diet revealed that nearly 40 percent of vegetarian and vegan Brits ditched animal products because of a partner.

International vegan food brand Fry Family Food Co, who carried out the survey with 2,000 people, found that 18% of the respondents adopted the lifestyle to please their partner, and a further 19% swapped to support their partners’ healthy eating choices.

Around 16% and 19% respondents made the switch because of their children and friends respectively.

While 53% of people said they felt ‘healthier and more energetic’ since going on a plant-based diet, 80% said making the switch was easier than they thought it would be.

Share this story to support the growing trend of plant-based living.