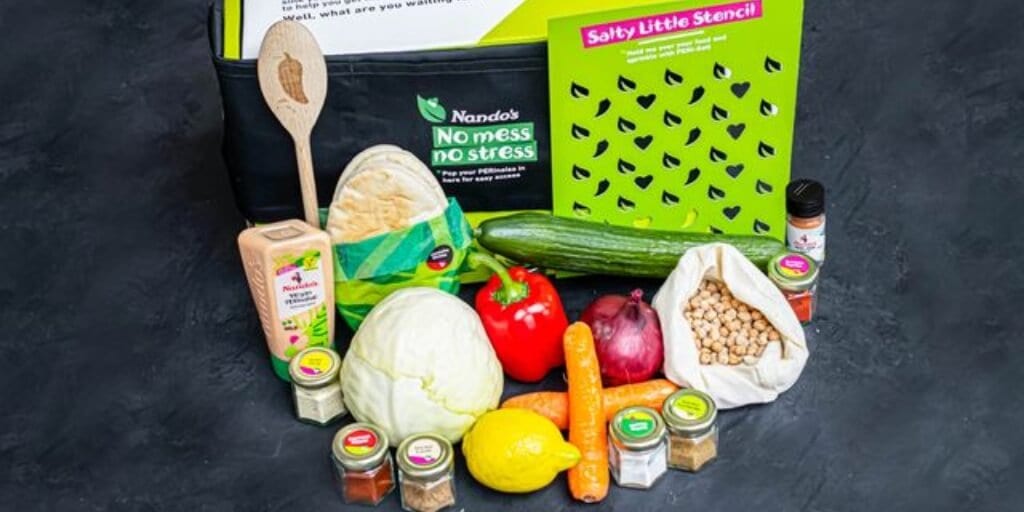 The box is made in partnership with leading online cookery platform, MOB Kitchen.

The limited-edition box costs just £5 and allows Nando’s fans the chance to whip up a delicious PERi-PERi Falafel Pitta at home.

‘Flavour up this Veganuary’

“Need some inspiration this Veganuary? Look no further! Nando’s has teamed up with MOB Kitchen to launch a limited-edition Vegan Flavour Box – packed full of everything you need to flavour up Veganuary and celebrate your food with Vegan PERinaise,” Nando’s said in a statement.

“Each box comes packed with the ingredients, recipes and tunes needed to unleash your inner chef at home and create a delicious PERi-PERi Falafel Pitta for up to four people.

“We’ve also thrown in some goodies as well so you can really get into the PERi-PERi spirit!”

In addition, all proceeds from the Vegan Flavour Box will go straight to City Harvest – the food surplus distribution charity – that rescues more than 75 tonnes of surplus food from the retail and hospitality industry every week, re-delivering to community programmes for people who need it most.

This isn’t the first time Nando’s has launched a vegan-friendly option. Last October, the chain launched its first-ever plant-based chicken across 340 stores in the UK.

Called The Great Imitator, the vegan-friendly chicken alternative ‘was crafted to taste just like its signature PERi-PERi chicken breast fillet’. According to the chain, it was targeted at the growing number of flexitarians looking to reduce their meat intake. ⁠

Share this story to let others know of Nando’s limited-edition Vegan Flavour Box.