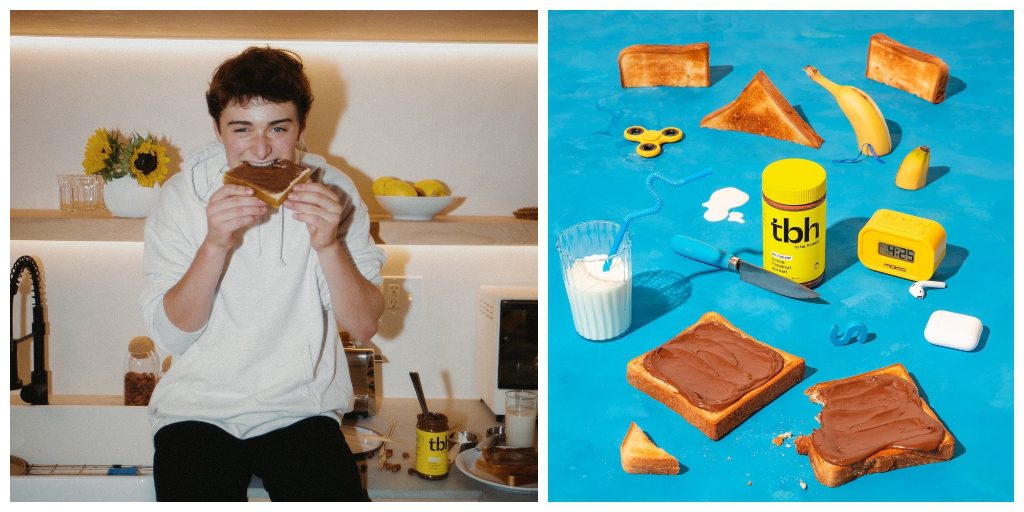 The vegan spread is gluten-free, has three times more protein than other hazelnut spreads, and is 50% less sugar than the category leader.

Noah Schnapp is launching a vegan and sustainable alternative to Nutella.

The Award-winning Canadian-US actor known for his portrayal of Will Byers in Stranger Things teamed up with ‘purpose driven’ Umana Venture Studios – to launch his brand TBH (To Be Honest).

The new product idea came after Schnapp, who loves hazelnut spread on toast, learned that his favorite snack contains palm oil – a leading cause of deforestation and habitat destruction and other eco-damaging ingredients.

According to the company, the vegan nutella is gluten-free and kosher. It also has 6g of protein – three times more protein than other conventional hazelnut cocoa spreads – and 50% less sugar than the category leader.

Furthermore, the cocoa sourced for the recipe is UTZ-certified – a label, which stands for more sustainable farming and better opportunities for farmers, their families, and our planet.

Speaking about the new product, Schnapp said: “TBH is inspired by honesty. It’s about being transparent with ourselves about what we’re actually consuming, and then making a change for the better.

“Hazelnut spread on toast has always been my favorite comfort food, but of course, when I was a kid, I didn’t realize that my snack habit wasn’t very good for me or the environment.

“Once I found that out, I wanted to create a new take on hazelnut cocoa spread with honesty and sustainability at its heart, and found the perfect team to help that vision come to life.”

According to recent reports, young people are leading the charge toward plant-based living.

A recent survey showed that a majority of young people (aged 15 to 20) were taking action to tackle the climate crisis. Around 26% of participants said they transitioned to plant-based eating to help protect the planet.

A separate BritainThinks report concluded that Gen Z are mostly likely to be vegan or vegetarian. It also noted that more than a third of Gen Z vegetarians follow a meat-free diet for its lower impact on the environment.

Products better for you and the planet

“This is super important for Gen Z [consumers] as I’ve noticed they like voting with their dollars. They want products that are better for you and better for the planet.”

“I feel lucky to be in a position where I can help my generation make a difference through simple pantry swaps like TBH,” the 17- year-old added.

TBH will be available online at www.snacktbh.com  from 1st November.