What is Soya Milk? Is it healthy? Everything you need to know about Soy Milk | Totally Vegan Buzz
Skip to content

What is Soya Milk? Is it healthy? Everything you need to know about Soy Milk 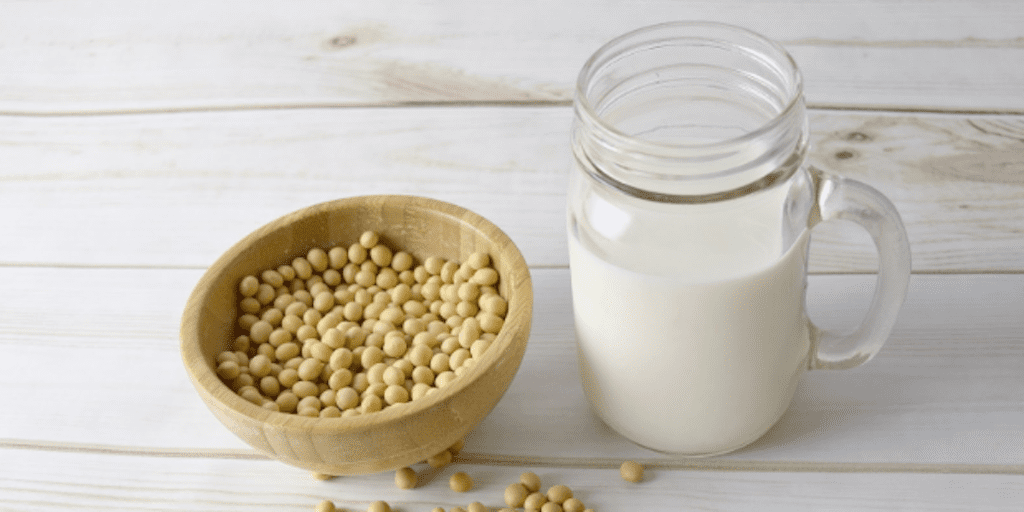 Soya milk is widely used as a vegan alternative to dairy milk. But what is soy milk? How is it made? Is it healthy? How does it compare to other plant-based milks such as rice milk and coconut milk? Totally Vegan Buzz brings you the ultimate guide to soya milk.

What is soy milk?

Soya or soy milk is a plant-based milk made from soybeans. To make, soybeans are washed and soaked in water. The ground mixture is boiled and filtered to get a smooth consistent liquid. Soy milk is a natural byproduct of the tofu industry.

In China, the original form is called doujiang (soybean broth), and is more watery with a beany flavour.

The processed variety, which resembles dairy milk in flavour and consistency, is called dounai (soybean milk).

What is the history of soy milk?

Soy milk is thought to originate in northeastern China in the 2nd century BC, developed by Liu An, who is also considered the inventor of tofu.

Soy milk became popular with the introduction of tetra packs, improved production technology and techniques and a surge in demand.

A report from Market Research Future predicted the global soy milk market to grow at CAGR of 3.2% from 2017 to 2023.

Yes, soy milk is made from soybeans and water and is vegan. It is a plant-based milk alternative to dairy milk for vegans similar to coconut milk, hemp milk, almond milk, rice milk, cashew milk and peanut milk.

Make your own soy milk

Originally, soy milk has just two ingredients: soybeans and water. However, to make soybeans more palatable and similar to dairy milk, some manufacturers add thickeners and artificial sweeteners. Sometimes it is even fortified with calcium and other nutrients.

To avoid any additives, some people prefer to make their own soy milk at home.

Soybeans are first soaked in water for a few hours. These rehydrated beans are ground well with some water to get a puree, which is then boiled to improve flavour, and to sterilize the liquid. The slurry is then allowed to cool and then filtered.

Soy milk is generally considered as a healthy drink. It is rich in proteins, Vitamin A, potassium and isoflavones.

Soy milk has been linked to strengthening blood vessels, preventing osteoporosis and helping in weight loss.

Even though there are plenty of health benefits from soy milk, the ready-made varieties are often produced with genetically modified soy, which may cause problems. Also, too much of soy might not be good for those with a thyroid condition.

According to research, soy milk is not recommended to women who have suffered from breast cancer or are sensitive to estrogen as it contains chemicals that are similar to estrogen.

Another study indicates that high intake of soy is associated with lower sperm count.

What can be made with soy milk?

Soy milk is widely used as a vegan alternative to milk. It can be used in a variety of dairy-free beverages and dishes.

Apart from the regular use in tea and coffee, soy milk can be used to make vegan versions of ice creams, shakes, smoothies, custard, pancakes and muffins.

How does soy milk compare to other plant based milks?

There is a wide variety of plant based milks available for vegans which includes coconut milk, hemp milk, almond milk, rice milk, cashew milk and peanut milk amongst others. Each of them has its unique nutritional profile, flavour and texture.

Soy milk is high in proteins, whereas rice milk is high in carbohydrates. A study published in the Journal of Food and Technology notes that soy milk is better in comparison to other plant based milks, such as almond, rice and coconut milk, in terms of nutritional profiles.

Where to buy soya milk?

What is your favourite plant-based milk? Do tell us in comments below!