‘Vegans who are afraid of activism underestimate what they already do’ 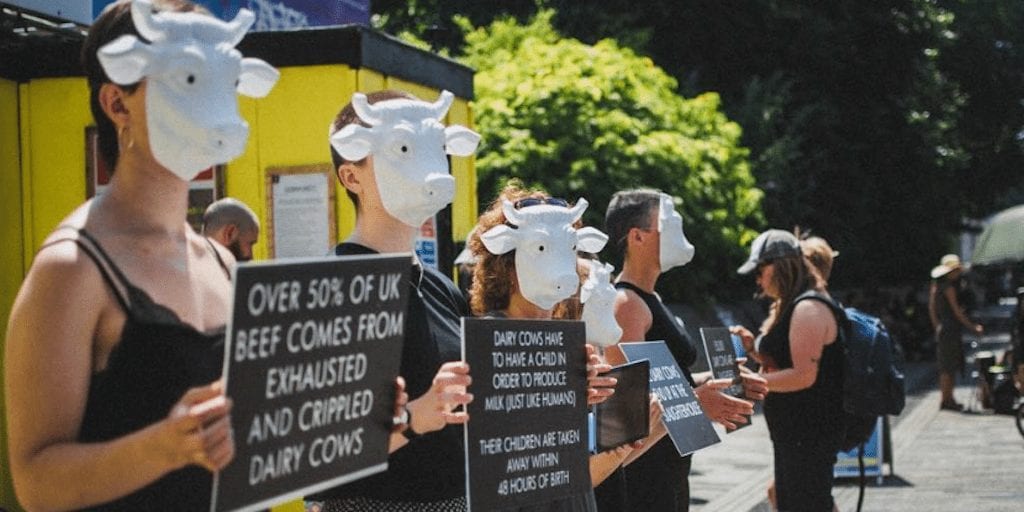 The word ‘activism’ stirs contrasting emotions, even among vegans. For some, it lights a fire – they’re ready to take on the world and counter any meat eaters who disagree. But others shudder at the mere mention of vegan protests.

Vegans can be found in all walks of life and come in all shapes and sizes. They can differ on many beliefs, but they all have one thing in common – vegans all seek to exclude, as far as possible, all forms of animal exploitation and cruelty.

For many, the key reason for adopting the diet is ‘for the animals’. So then why is there so much conflict about how vegans view activism?

And he believes activism takes many forms: “It might be talking to a friend about the dairy or meat industries or, even subtler, eating something appetising that piques the interest of a nearby non-vegan. It doesn’t necessarily have to be shouting on the streets.”

Gurney has been vegan for three years, and is now the face for his activist organisations.

Other protest groups such as Direct Action Everywhere have hit the headlines in recent months for their invasive tactics, storming restaurants and supermarkets chanting ‘meat is murder’.

At Brighton Vegan Activists’ Down with Dairy event, held on February 10, the group showcased dairy alternative food samples at their stall.

This way non-vegans can approach a plant-based diet through their own curiosity, and initiate a conversation about veganism.

The groups also organise socials at pubs and restaurants outside of the protests, some of which even include members’ parents.

In Gurney’s organisations, volunteers who are uneasy about protesting can take a softer strategy and help talk to people who have shown interest.

“I encourage anyone to come for as long or as little as they like. We have many roles that could be suitable. I want people to find their own style of activism,” he explained.

The activist understands that a lot of aversion to activism comes from the social anxiety of hitting the streets to face people who are likely to react badly, and acknowledged it can feel overwhelming.

“Before my first time I was incredibly anxious about what my friends and family would think. Social anxiety makes people scared to get involved,” he said.

Over time he has found it less daunting and even his mum, who was apprehensive at first, fully supports him and shares his stories now.

To Gurney, shock factor and theatrics are also important to the cause, as this leaves a lasting impression in people’s minds. With this in mind, the activists wear cow masks during some demonstrations. 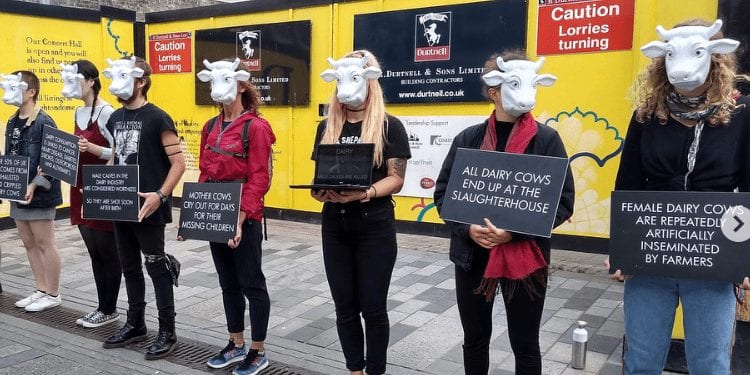 He continued: “We show the public footage of dairy farming while holding up signs with facts about the dairy industry, and outreach to the public using open questions to draw them to their own conclusion.”

Gurney invited anyone curious of activism to contact the group, and shadow a member if they’re interested in getting a taste of life as an activist.

He said: “They don’t even have to wear the mask on their face if they are uncomfortable, they can have it on their arm, or even chest.”

‘It’s about the animals’

To those who think activists ‘gives vegans a bad name’, Gurney sends the message: “It is not for an image. It is not about you, it’s about the animals.”

He believes that activism, in whatever form, fundamentally boils down to using your voice to help educate and highlight the suffering endured by animals.

He added: “The animals need us to speak for them, if not us then who?” 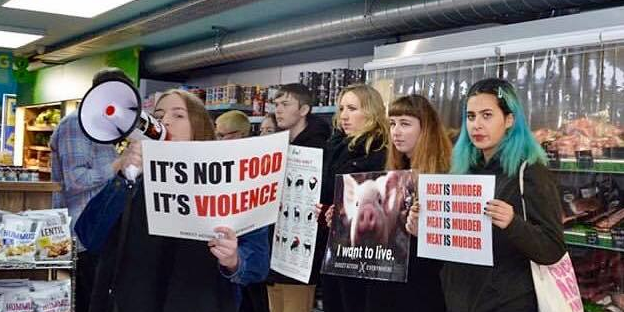 Members of Direct Action Everywhere protesting at HISBE in Brighton

“It highlighted normalised violence which occurs in everyday businesses whether smaller ones like HISBE or larger supermarkets,” Gurney said.

And the key issue is not with HISBE selling meat, but rather that they are trying to dress it up as being ‘humane’.

By using buzzwords such as ‘sustainable’ and ‘ethical’ HISBE are ‘misleading’ customers who respond to such marketing, without thinking about where their ‘ethical’ meat is coming from, he argued.

“I think it it great that they are selling package-free stuff and vegan produce. I wish they would stop the bull****,” he added.

When asked about backlash, Gurney said most is on the passive-aggressive side, but he’s also frustrated by ‘deliberately divisive’ angles in the press.

He was disappointed in local news coverage of a petition where activists were branded “nasty” for successfully asking to ban the use of circus animals.

But with veganism now flourishing across the UK and a rise of v-curious individuals, he has generally found most people to be more responsive.

Fundamentally, Gurney argued that whatever approach you take, whether at a dinner table or on the streets, anyone who is practising veganism is playing a role in popularising the movement, and should be proud of their part in saving the lives of countless animals.

What do you think of Gurney’s style of vegan activism? Tell us in the comments section below! 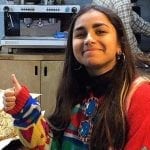