What is Textured Vegetable Protein (TVP)? Everything you need to know about TVP | Totally Vegan Buzz
Skip to content

What is Textured Vegetable Protein (TVP)? Everything you need to know about TVP 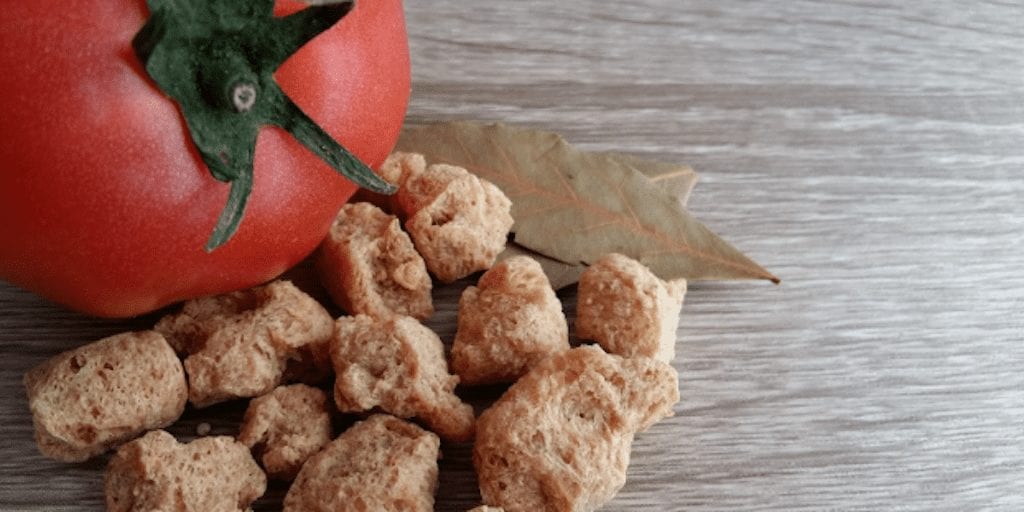 Textured Vegetable Protein (TVP) or Textured Soy Protein (TSP)  was one of the first commercially available meat alternatives for vegans across the globe. But what is TVP? Is it healthy? What does it taste like? Where can you buy it? How can you cook with it? Totally Vegan Buzz brings you the ultimate guide.

What is Textured Vegetable Protein?

TVP, also known as soy meat, chunks or granules, is a fat trimmed soy flour produced as a by-product from extracting soybean oil.

It is often used as a meat substitute as it is cost-effective, has a similar texture to animal meat and has the ability to absorb flavours easily.

The high protein content of TVP makes it a nutritious addition to a vegan or vegetarian diet.

What is the history of TVP?

TVP was invented by Archer Daniel Midland, an agricultural commodities and food processing company, in the year 1960. The company still owns the TVP name trademark.

Initially, TVP was created in rod shapes. However, it was not commercially successful at first.

By the year 1968 though, TVP’s popularity started to rise, and begun being used in a variety of dishes. A further boost came when it was approved in school food lunch programs in 1971.

How is TVP made?

TVP is mostly factory-produced from soy flour, but is sometimes made from cotton seeds, wheat and oats.

The soy version is made with soybeans that are dehulled, grounded and then have the oil extracted.

Water is mixed with soy flour before heating at high temperatures and pressure inside an extruder.

The opening of the extruder varies, but in general is a plate with holes.

The heated mixture comes out of the holes, which is cut into small pieces by blades. The small pieces start to puff up as the pressure drops outside the extruder. These pieces of TVP are then either dried or baked.

What are the benefits of TVP?

Health benefits of TVP include

TVP is considered a healthy option as it is made from soy, which is high in protein and other nutrients.

Many researches on soy products suggest that it helps reduce blood sugar levels in people with diabetes.

Also, consumption of TVP is linked to improvement of Irritable Bowel Syndrome (IBS), helpful in kidney diseases and in controlling high blood pressure, according to research.

TVP is also considered helpful in reducing the risk of developing breast cancer in some women.

Since TVP is cheap, easy to cook and has a variety of health benefits, the global demand is on the rise.

According to a report by Future Market Insights, the global TVP market is projected to grow at a CAGR of 4.9% in the period 2018-2028.

Even though TVP is likely a safe food product, some argue it is unhealthy as it is not a natural product and is made through excessive processing.

The number of chemicals used, high pressure and heat involved in the process of creation makes TVP a thermoplastic substance.

How to cook with TVP?

TVP is a versatile ingredient that can be used as a meat replacement in a variety of vegan dishes like chili, tacos, burgers and burritos.

TVP is also used as a meat replacement in many dishes as a low cost high nutrition addition. Soy chunks and granules can be rehydrated by adding hot water and soaking to allow TVP to absorb the liquid.

As a rule of thumb, the larger the pieces, more water and more soaking time is needed for rehydration before usage.

Where can you buy Textured Vegetable Protein?

TVP is sold in most health food stores in packaged form. It comes in either chunks or granules and the color ranges from golden brown to beige.

Would you eat Textured Vegetable Protein as a meat substitute? Tell us in the comments below!