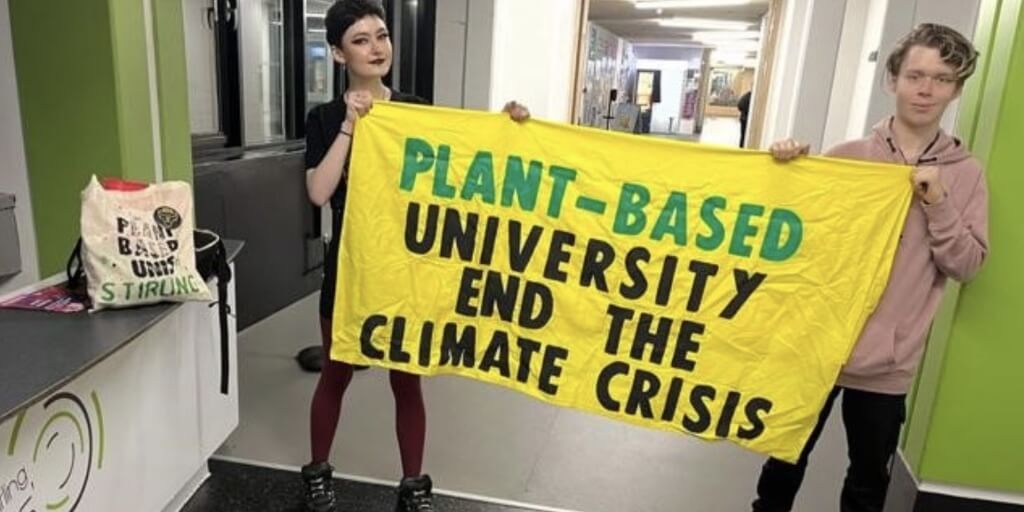 The University of Stirling has voted in favour of vegan menus following a campaign by Animal Rebellion.

The motion sought to transform menus of the three outlets operated by the union. With the favourable vote, Studio, Venue and Underground Coffee Shop are set to transition to 100% plant-based catering.

The decision, which is the first of its kind in the UK, is part of the Union’s effort to “address the climate and ecological emergencies”.

The student body has committed to go completely plant-based by 2025 and intend to achieve 50% of the target by the 2023-24 academic year.

The motion is an initiative under the Plant-Based Universities campaign, in which students from over twenty universities across the UK are demanding 100% plant-based on-campus catering.

The campaign is supported by the climate and animal justice movement Animal Rebellion.

Plant-based universities and animal_rebellion released a joint statement on Instagram to celebrate this momentous milestone.

“This move is an unprecedented step towards climate justice within our universities,” they wrote.

“Stirling’s student union has listened to the scientific advice from world-leading academics, and are setting a gold-standard in environmental policy for other universities to follow.”

The groups added: “We will be working with catering staff to ensure this vote is implemented in a way that provides cheap, delicious and sustainable options throughout campus.”

The decision was applauded by George Monbiot, a climate and animal justice writer and author of ‘Regenesis’. He said: “It’s fantastic to see the next generation taking control of their future and putting humans, nonhuman animals and the planet first.

“The Plant-Based Universities campaigners at The University of Stirling are leading the way in tackling the climate crisis and creating a sustainable food system.”

Campaigners are hopeful that Stirling will “spark a wave of bold action across UK universities to commit to fully just and sustainable plant-based catering’ and  take steps against University complicity in the climate crisis.

Especially since  UK’s largest student campaigning network People & Planet reported in December 2021 that the majority of universities are failing to even meet their short-term emissions targets.

Moreover, Global Food Security, a group of the UK’s leading public funders of food-related research, concluded that ditching meat and dairy will considerably lower the environmental impact of food.

According to Joseph Poore, researcher at University of Oxford: “A vegan diet is probably the single biggest way to reduce your impact on planet Earth, not just greenhouse gases, but global acidification, eutrophication, land use and water use. Avoiding consumption of animal products delivers far better environmental benefits than trying to purchase sustainable meat and dairy.”

Vaania Kapoor Achuthan, 19, a student at University College London said: “Universities are sites of knowledge, and they (themselves) advance our scientific understanding of the harmful environmental impact of meat, fish and dairy industries.

“They, therefore, have a responsibility to listen to that science and take necessary action. Universities claim to be preparing us for the future, whilst also threatening it by selling environmentally-harmful animal products.

“More plant-based options will not alleviate universities’ direct involvement in the climate crisis. We will continue campaigning until our universities display actual progress towards 100% just and sustainable plant-based catering.”

Share this story: University Of Stirling becomes the first in the UK to go 100% plant-based.